Visit of a representative of the Pastoral of the Children and of an Physical Education teacher. Both informed they will program activities with the children in the CRI – Center of Reference to the Immigrant, where snacks will be served and games will be played.

Thirty boxes of cookies were received, then served in the afternoon snack to children and adults. Also donations of clothes and of disposable diapers were received.

Eight medical attendances in the truck of the Secretary of Health were conducted.

Raising of donations of greens and vegetables in the Fair of the Producer, in the city of Boa Vista.

The digging of a ditch was done for the draining of clothes-washing water that had been stuck.

In the afternoon, the medical referral of two Venezuelan was done. One is under treatment of tuberculosis and AIDS and the other for a psychiatric consultation.

Presence of a student from Brasilia who went to the CRI to collect information and talk with the Indigenous people, ando f a university teacher who went to be informed about the quantity of Indigenous, to make a debate with his students.

Indigenous Chiefs gathered with the member of the Civil Defense responsible for the organization of the CRI, in an attempt to find alternatives for refugees outside the Center, as the idea of the Center of Reference to the Immigrant is to be a place of temporary support for the refugees.

Visit of a Friar of the Catholic Church, who offered to celebrate a mass in the CRI next Tuesday.

Arrival in the CRI of a family of Venezuelan refugees with four people. 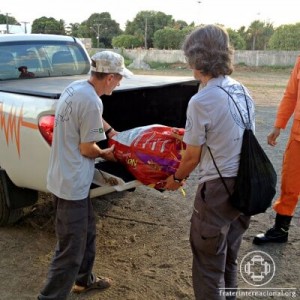