Choir of Venezuelan children inaugurates in Boa Vista, with the support of Fraternidade 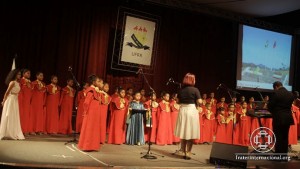 The Choir Little Canaries of Amazonia, with headquarters in Pacaraima, Roraima, and integrated by children arriving in Brazil with the Venezuelan exodus, has made a presentation for the first time in Boa Vista, capital of the state of Roraima. The debut was in the auditorium of the Federal University of Roraima, on October 23, 2018, in the opening of the 4th International Society and Borders Seminar – IV SISF.

Since September of this year, the choir is one of the projects supported by Fraternidade – Internarional Humanitarian Federation, as part of its Humanitarian Roraima Mission and of the Welcome Operation, executed by the Brazilian Government. The musical initiative, supported by the Cultural Association Little Canaries of Amazonia, has now the financial support of the UNHCR (United Nations High Commissioner for Refugees) and of the Brazilian Army, which supplies a good part of the food for the Venezuelan children.

The choir participated with 46 components, all Venezuelan immigrants, who integrate the fifth generation of Canaries of Amazonia. The musical direction was done by Miriam Blos, with conduction of Rafael Gonzales and Esther Araújo.

A peculiar fact was the intensity with which the Venezuelan presenter Gumnar Crespo interacted with the group, at each interval between the presentations: even without speaking Portuguese, or daring to speak “Portunhol” (a mix of Portuguese and Spanish) once in a while, he obtained, with very good humor, an interaction with the public with a lot of fun. 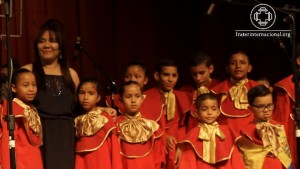 Miriam Blos, with her students

The beginning of the presentations was solemn, with the singing of the National Anthems of Brazil and Venezuela. Then, with a varied and very well rehearsed repertoire, followed the song “Canarinhos Embaixadores da Paz” (Canaries Ambassadors of Peace, in free translation), considered the anthem of the choir, and authored by Miriam Blos herself.

Twelve songs were sung altogether, from the classics, such as the very beautiful “Benedictus” and “Hallelujah”, including the popular “Mulher Rendeira”, and ending with Venezuelan songs. In short, a wide repertoire, with very well rehearsed songs, and the lightness of the good youth voices.

The choir began its first steps in 1993, with Brazilian children, under the inspiration of Miriam Nascimento Blos, a conductor from the state of Amazonas, born in its capital, Manaus. Graduated in Music, Didactics and Theology, specialized in Amazonian music and sounds, she began to gather children from Roraima with the intention of “forming with dignity the seeds of tomorrow”. Thus reported Karisse, daughter of Miriam Blos, during the presentation held in the University of Roraima.

The Project evolved and the Little Canaries of Amazonia Cultural Association was created, to give institutional support to the choir.

Some time later, the Project was transferred to Santa Elena, a Venezuelan city located in front of Pacaraima, in the border between Venezuela and Brazil. Miriam moved there and continued the choir, working with children of Brazilians who reside in this locality. In 2015, she returned to Brazil and settled in Pacaraima, in a place that came to be known as the House of Music, which is today a reference for the families who migrate from Venezuela. The little school receives daily about 60 Venezuelan children, who find in music a refuge and emotional support, amidst so much desolation.