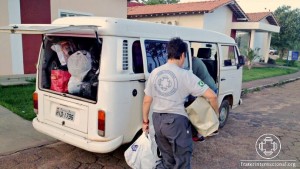 Monday, 24, began with the distribution of clothes, footwear and hygiene kits for the Venezuelan Indigenous and non-Indigenous immigrants newly arrived at the CRI – Center of Reference for the Immigrant, in the city of Boa Vista, capital of the state of Roraima, Brazil.

The representative of the Association of the district were the CRI is located went to the place and showed concern with the Venezuelan that ramble on the streets. Then he offered to work in the shelter as volunteer, and he began the activity right away.

Representatives of the United Nations High Commissioner for the Refugees (UNHCR) were in the shelter and talked with the Indigenous Chiefs to discuss the issue of work the artisanship using Buriti straw. 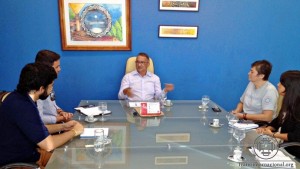 Meeting at the Roraima Federal University

Referrals of families were made to the Social Pastoral of the Catholic Church.

Accompaniment of four Indigenous people to the Federal Taxes Services of Brazil to obtain documents.

In the afternoon there was a vigil of prayer in the Nucleus-of-Light of Figueira in Roraima.

Missionaries of the Fraternidade gathered with the Rector of the Roraima Federal University (UFRR) and representatives of the UNHCR to solve administrative issues and to sign agrément of mutual cooperation concerning the Venezuelan immigrants. 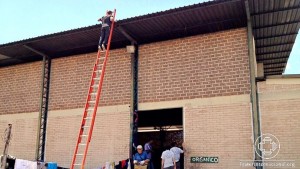 Repair on the roof

⟢
On the following day, a meeting was held in the Nucleus-of-Light of Roraima with a volunteer, student of Journalism and Pedagogy, who intends to widen and organize the educational activities in the CRI and is creating a project with UNHCR.

In the shelter, the day began with prayer among the children.

Three representatives of the Oswaldo Cruz Foundation (Fiocruz), an institution affiliated with the Ministry of Health of Brazil, were in the CRI. They intend to conduct a work related to violence against women, connected with drug-consumption.

Missionaries of the Evangelical Church visited the CRI to learn about the needs, where they can collaborate and left donations.

Repairs were done in the roof. 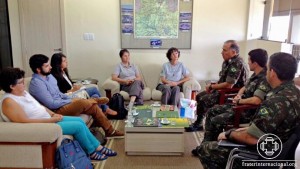 Meeting at the Jungle Infantry Brigade of the Brazilian Army

At night, the weekly meeting of the mission was held, with 15 participants, including four monastics of the Grace Mercy Order, two members of the Network-of-Light and nine missionaries.
⟢

On Wednesday, 26, the missionaries went to the maternity of the city of Boa Vista, to transport a mother with her baby who received discharge.

Received donations of provisions (flour, coffee, sugar, rice and clothes) and many boxes of oranges
⟢ 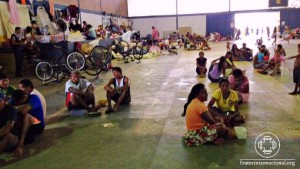 On Thursday, 27, a meeting was held with the Indigenous people. One of the topics agreed upon is their not going to the streets to beg for alms.

On this day, the lunch fixed was not sufficient for everyone and many did not have lunch. The situation was solved with the production of a new lunch while the immigrants awaited in the shelter.

A volunteers of the Methodist Church collaborated in the little school, bringing exercises, paintings and snacks.

A Venezuelan immigrant newly arrived in the CRI had his feet treated, as they were wounded due to the long walks. The band-aid was replaced the following day, with the help of two children.

Children played soccer, in spite of the heavy rain that was falling. 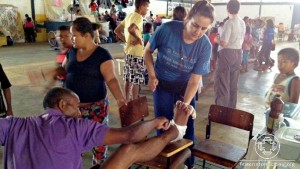 Friday, 28, began with the arrival of new provisions to supply the storage of the shelter.

The amount of rice cooked for lunch was increased and the donation of four boxes of fruits was raised.

A group of women gathered to work artisanship of beads and sewing of skirts.

Enrollment of new immigrants in the shelter was done, as well as the cleaning of the cesspit.

During the week, several actions of health were conducted in the shelter, such as basic health attendance, as well as dermatological and psychological services, and the delivery of hygiene kits.

A Nursery teacher of the Roraima Federal University, together with the group of the Special Secretariat of Indigenous Health (Sesai), conducted health attendance for the immigrants with the register of weight and measures of the children. 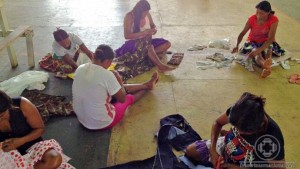 Activities of education and recreation

Skipping ropes with the children.

Classes for children and youth took place daily during the week, organized by the members of the Grace Mercy Order and volunteers.

Dialog and instruction for mothers of newborn babies.

Classes of bijouterie and sewing, and presentation of the works of sewing that are produced in the shelter with the support of volunteers.

During the week, several press teams went to the shelter.

The channel Globonews made live transmissions, reports and interviews.

A German TV and Roraima TV made reports. 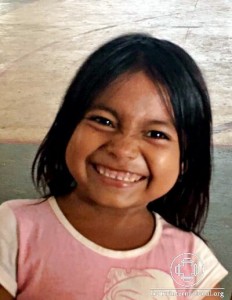 During some days of the week, the volunteers of the Fraternidade that were rendering services of health attendance in the shelter perceived the company of an Indigenous child that constantly offered to help in the tasks. Her name is Ucali, a Warao child of 6.

“Always smiling, she would ask to help and take the medicines to the patients and was always nearby. A certain day, we received a great donation of oranges, and we had two adults making the distribution. Ucali arrived and helped distribute the oranges to children and adults. Only in the middle of the task, after having distributed many donations, she stopped and asked me if she could pick one orange for her. I noticed that she only thought of her after distributing many oranges to the brothers and sisters. She joined the task with the missionaries”, said Renata, a collaborator of the Network-of-Light. 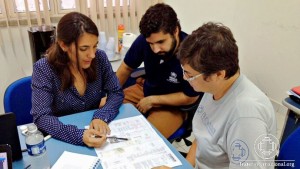 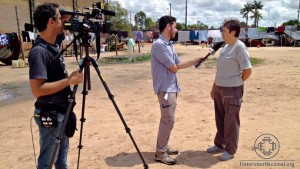 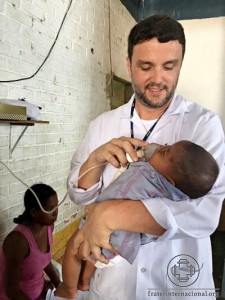 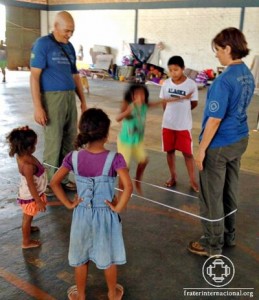