October 2 to 8, Monday to Sunday 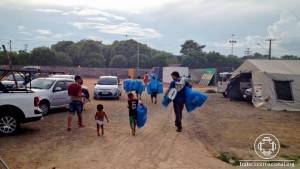 Mattresses donated by the UNHCR

On Monday morning, 2, the architect of the United Nations High Commissioner for Refugees (UNHCR) gathered with missionaries of the Fraternidade – International Humanitarian Federation – and Venezuelan Indigenous and non-Indigenous leaders. The distribution was defined of the immigrants in the tents in the external area and in the hammock area inside the CRI – Center of Reference for the Immigrant.

A representative of the International Organization for Migrations (IOM) has obtained a course of sewing for three Venezuelan Indigenous immigrants. The course will last for three months and will be imparted three times a week. The place of the course will be Cooperative of Solidary Endeavors of the City of Boa Vista (Coofecs), which produces school uniforms and professional clothes. 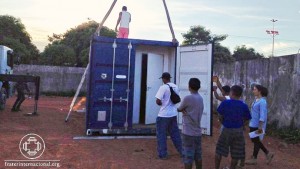 The Secretary of Labor and Social Welfare of Roraima (Setrabes) handed to the shelter the remaining mattresses donated by the UNHCR to be used inside the tents.

At night, the first container was delivered. It will be used as a place for consultations and health evaluations of the immigrants who arrive at the shelter.

Gate of the CRI was closed at 11 p.m. and opened at 6 a.m. The hours will remain more flexible until the persons entrance control begins by means of identity cards. 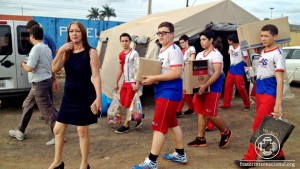 Two more containers arrived at the CRI: a small one to be used as a toilet, and a big one where the reception of the shelter will be installed.

Three fans were installed inside the gymnasium, and 16 tents of the Civil Defense were assembled, which were then distributed among the immigrants who lived in the external area of the shelter.

High school students of the Reizinho School made donations of food items. 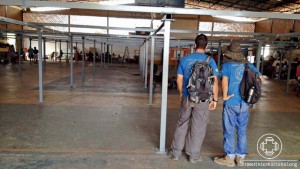 Structure for hammocks installed in the gymnasium

An Indigenous immigrant arrived with her newborn baby. As the mother had shown signs of chickenpox, the baby was referred to hospital to take medicine.

The beginning of installation of the hammock sector inside the gymnasium of the CRI.

Arrival of 128 hammocks donated by the UNHCR, which will be distributed as soon as the hammock areas are ready.

Missionaries began to control the people crossing the gate of the shelter. The action became necessary especially after the City Hall dislocated several immigrants who were on a square downtown.

Lunch was offered by a food distributor who gave instant noodles. Representatives of a company that produces this food have decided to donate to the shelter 50 boxes every two months.

A team of the Newspaper Em Tempo came to the CRI to check the improvements in the place. 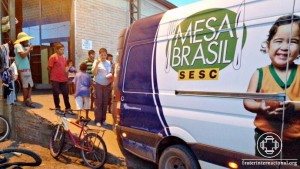 The garbagge accumulated in the shelter was removed. In the place a new structure for the deposit of garbage was left.

Policepersons came to the shelter and recovered a bicycle that had been stolen from a boy who lives in Boa Vista.

The control of entrance of persons at the gate of the shelter began to be done by an Indigenous representative, a missionary of the Fraternidade and a representative of the non-Indigenous immigrants. The work is done with shifts of people every two hours.

Made the selection of food items donated in the morning.

Collaborators and members of the monastery conducted therapeutic attendance.

Nail trimming and games with ropes for children ages 5 to 11.

A reporter of the Rede Amazônica TV made a report about the renovations in the shelter. 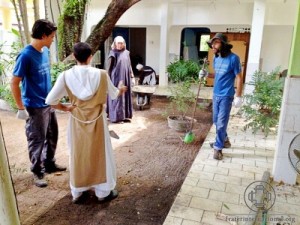 Group service in the Nucleus-of-Light

Day of group service in the new place of the Nucleus-of-Light of Figueira in Roraima, with the participation of missionaries of the Fraternidade, members of the Network-of-Light, of the monastery and collaborators.

In the CRI, three missionaries did the shift and some people made donations of food. Also a donation of bread was received, and made the distribution of milk and diapers for the children.

In the food served in the shelter more and more greens are being introduced, which at first were not a nutritional habit of the Indigenous immigrants.

Cleaning was done (the sweeping of the floor) in the internal and external area of the shelter.

Recreational activities with the children and instruction of the mothers, with tips for personal hygiene. 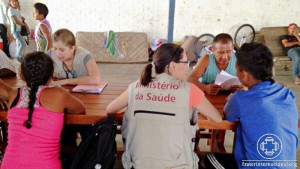 Health Ministry agents in the CRI

Team of the Health Ministry

During the whole week, a team of the Health Ministry talked with the immigrants in the shelter for the collection of information regarding health that will be used for the  planning of future actions in the place. 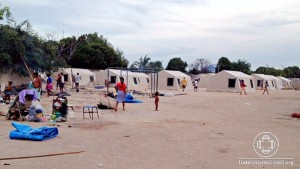 Tents in the external area of the shelter 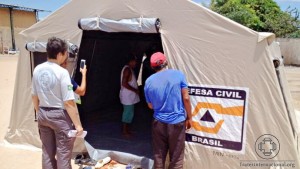 Distribution of families in the tents 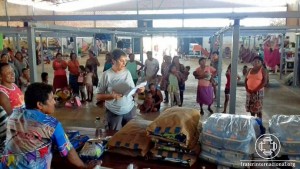 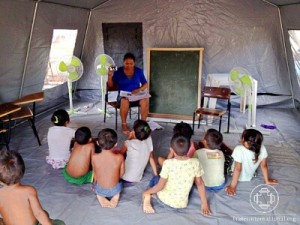 A class inside the tent 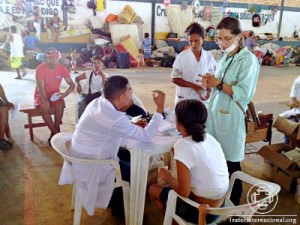 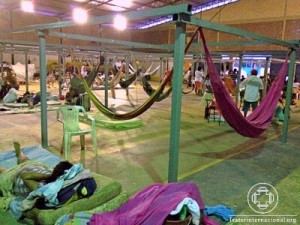 Hammocks inside the shelter during the night Group service in the Nucleus-of-Light 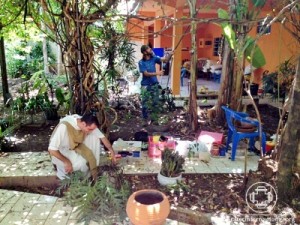 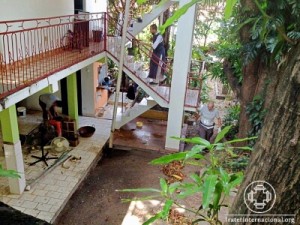 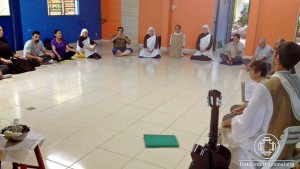 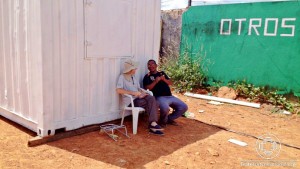 Control timetable at the entrance gate of the shelter