The selection was made of donations and shelves were placed in the office of the Fraternidade – International Humanitarian Federation, in Roraima.

Members of the Methodist Church fetched mothers, children and teenagers of the shelter to spend the afternoon at church. There they participated in recreational activities, artisanship, hygiene instructions and Portuguese classes.

A monastic of the Catholic Church took five Indigenous women for an artisanship activity at church. 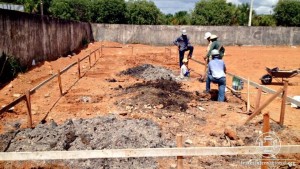 Toilets construction in the CRI

A cradle was received as a donation, and was offered to a newborn baby in the shelter.

Bandeirantes TV made a report about the situation of overcrowding of the CRI – Center of Reference for the Immigrant.

The representative of a food company made a donation of products.

A shop in the city of Boa Vista donated about 90 pairs of shoes, children’s and adults’, which were taken to the storage of the office of the Fraternidade in Roraima.

Beginning of repairing for the installation of electric power in the tents of the shelter.

Beginning of construction of the ten toilets to be built as a donation of the Mormons Church.

The Roraima Secretary of Labor and Social Welfare (Setrabes) published a public notice for the hiring of professionals for the shelters of Boa Vista and Pacaraima. They are job opportunities for social-instructor agents, social assistants, psychologists, anthropologists and coordinators.

A team of the Health Ministry continues survey about the health needs of the immigrants in the shelter.

Sesai attending in the shelter

Thirteen tents of the Civil Defense were delivered, which will be assembled and directed to the Venezuelan non-Indigenous immigrants.

The Special Secretary of Indigenous Health (Sesai) of the Special Indigenous Sanitary District (Disei) of the East conducted attendance in the CRI.

A baby of 12 days needed to return to the maternity to receive health card and take the necessary vaccines.

An Indigenous immigrant was taken to hospital with breathing problems, was medicated and returned to the shelter.

Students of the Zion School of Boa Vista went to the office of the Fraternidade in Roraima and made a donation of clothes, foods and hygiene and cleansing material. Then the group visited the shelter, offered snacks and played with the children. 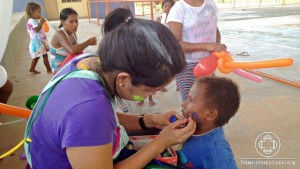 Recreational activities on the Children’s Day

On the morning of the day that celebrates the Children in Brazil, a team of the House de los Niños (of the Children) and the group Pirilampos (fireflies) conducted recreational activities with the children in a sports court of a school next to the CRI.

The Amazonia Rede of the Globo TV made a report about the activity held with the children in the morning in the shelter.

In the afternoon, a group of a distributor of foods of Boa Vista made the donation of toys for all the children. 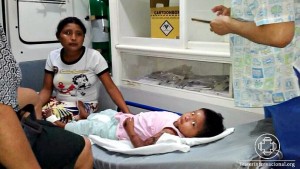 Child with chickenpox being taken to hospital

Bandeirantes of Roraima TV made a report to learn about the new situation of the shelter with the installation of the supports for the hammocks.

A donation of 10 kits of food, containing milk powder, sugar and cookies was received.

At night  a follow-up of health of an Indigenous child with chickenpox, with many wounds was held. She was referred to hospital, medicated and then taken to the Children’s Hospital, where she was hospitalized due to the serious state of the wounds in her body.

In the morning, there were activities in the kitchen, playful activities with the children and visits to the newborn babies.

In the afternoon, missionaries of the Fraternidade, collaborators and immigrants went to the Church and participated in a Mass. Two Warao children were baptized. 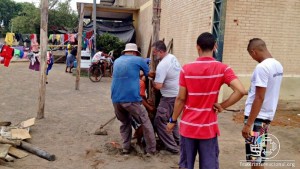 Cleaning external area of the CRI for the installation of tents

Activity of cleaning (sweeping) of the gymnasium. In the external area cleaning was done too, with the removal of old tents for the assembly of new ones, destined to the non-Indigenous immigrants.

Games with rope for the children.

A great donation of hygiene and cleaning material was received from a spiritist group. 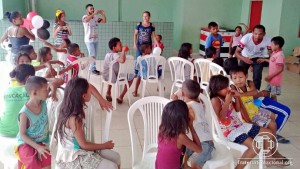 Recreational activity for the children at the club

A group of organized fans of a local soccer game took 50 children to their club for a morning of leisure, games and recreation. The children also received toys, clothes and a snack.

A spiritist group offered lunch and made the distribution in the CRI. They also donated snacks and sweets for the children. 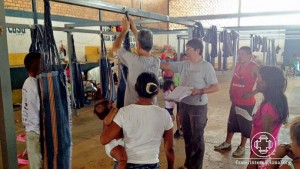 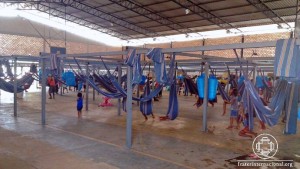 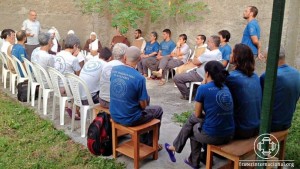 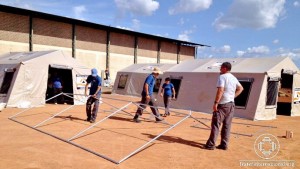 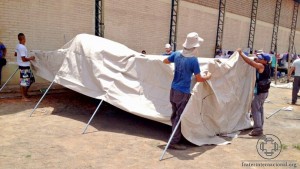 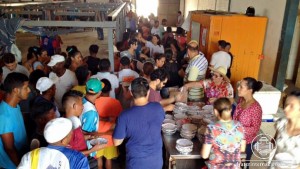 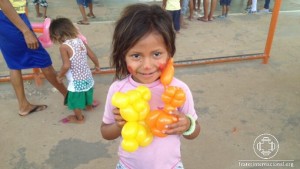