Saturday, 20, was a day of transition, with the arrival of the new team of missionaries of the Fraternidade – International Humanitarian Federation. Several meetings took place during the day, with Non-Indigenous and Indigenous refugees and with their leaders, to listen to the requests and check the situation in the CRI – Center of Reference for the Immigrant.
“We have observed that due to the excess of people in the place, improvements are necessary in the sanitary conditions and in the lodging of the refugees. It was a day for seeing again many who are there from the beginning and for sealing our commitment of humanitarian help with them”, said Clara, a missionary of the Fraternidade. 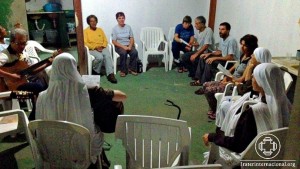 Rehearsal of the Choir

In the afternoon, a meeting was held in the Nucleus-of-Light of Figueira in Roraima with 26 volunteers and collaborators of society who were called to give their support to the work for the immigrants. Representatives of the State and Federal Universities of Roraima and of the Catholic and Evangelical Churches participated. “It was a moment of Exchange of ideas and information; the collaborators confirmed their support to the shelter in specific days of the week and we also could listen to their opinions. It was a very productive meeting”, explained Clara.

Nucleus-of-Light of Figueira in Roraima
On Sunday, 21, tasks of harmonization were conducted in the Nucleus-of-Light, such as the organization of stocks of the donations received and meetings of planning and preparation for the coming week. There was also the rehearsal of the choir of the Nucleus. 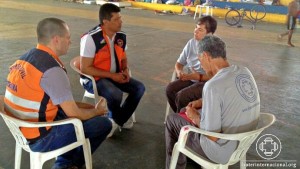 Meeting with the Civil Defense

Resolution of conflicts
Monday, 22, was a day of several meetings for the resolution of conflicts in the shelter, involving drug-use and prostitution. It was decided that the gates of the CRI would be closed and have surveillance in rotation from the refugees, to receive the people who arrive. Due to these problems, the Civil Defense, in a meeting with the missionaries on this week-end, has decided that the Venezuelan non-Indigenous male youth must leave the shelter.

The place of lodging of the families was reorganized, so that the people who were lodged in the external area could stay in the internal area.
Many cases of health were accompanied, with occurrence of cases of malária, fever and infections.
During the week, new meetings were held of reconciliation, behavior adjustment and collaboration to find solutions for co-existence in the shelter. 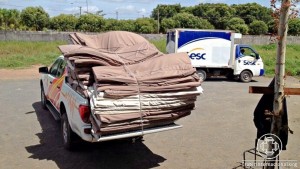 Arrival of the mattresses

Donations
The raising and reception of donations continued from both private groups of society who go to the CRI to make their donations and University and religious groups. Mattresses were received donated by a Franciscan Friar, fruits were brought by SESC (Social Service of Commerce) by means of the Program Mesa Brasil (Table Brazil), provisions from the Food Project of the Universal Church, domestic utensils and products for band-aids donated by a Pharmacy Industry.

The health attendance continued, with cases of child malnutrition, and diseases resulting from this problem. The missionaries conducted a work of awareness for the mothers, for them to communicate as soon as possible any health problem they perceive in their children.

Census of the immigrants in the shelter was concluded, and it will now be part of the routine of the CRI, and done every week.

With the arising of new Indigenous leaders, the missionaries resume the work of strengthening this leadership.

Vegetable garden
The building of a vegetable Garden was begun in the shelter, conducted by EMBRAPA – Brazilian Company for Agricultural Research, which has trained four immigrants for the task. The preparation of the terrain was made (cleaning and removal of trash) and seedlings of banana and cassava to be planted and stacks of eucalyptus to be used in the making of fences were brought from EMBRAPA. Another two voluntary immigrants went to EMBRAPA to make a selection of bactris gasipaes seeds, which will be distributed in the CRI. 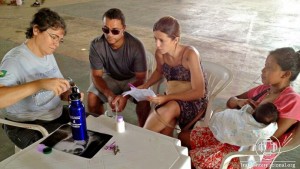 Volunteers from churches
Volunteers from the Catholic and Evangelical churches were in the CRI and offered to accompany, twice a week the immigrants with health problems for attendance in clinics and in examinations.

Collaboration of University students
A team composed by a pediatrician and also teacher of the Federal University of Roraima, accompanied by six Medicine students, were in the shelter and offered to act as volunteers. 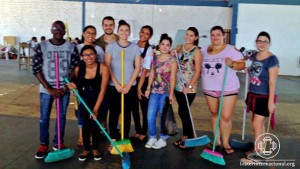 Students in the volunteer group service of cleaning

Another team of the same university, formed by a teacher and about 30 students of International Relations made a volunteer group service of cleaning in the external and internal area of the CRI. 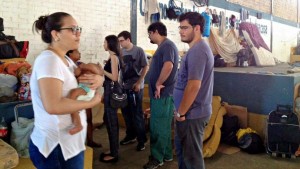 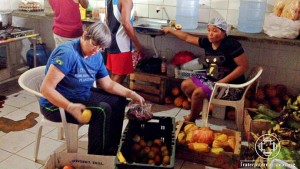 Activity in the kitchen 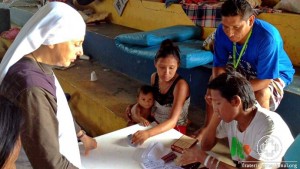 Accompaniment of health cases by the Monastery 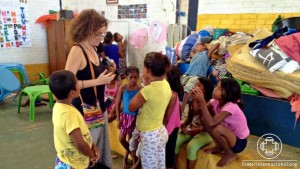