Abilities developed when helping Animal Kingdom after the breaking, in 2015, of the dam of the mining company Samarco in Mariana, Minas Gerais, Brazil, are strong allies in the voluntary front that now faces the consequences of the environmental tragedy in Brumadinho, Minas Gerais.

(11/2/2019) –  The team of missionaries of Fraternidade – International Humanitarian Federation (FIHF) has had 14 days of intensive work in the specific help to countless groups of volunteers and professionals who, according to local authorities, have rescued more than 300 animals so far. 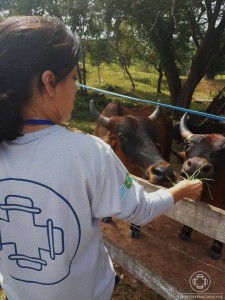 FIHF has headquarters in Carmo da Cachoeira, Minas Gerais, 220 km from Brumadinho, and decades of experience rendering humanitarian service in situations of crises in Brazil and the world. Its volunteers organized themselves right after they arrived in the place, just four days after the breaking of the dam of iron mine of the Vale Company, to participate in the welcome of domestic and wild animals.

The work attends a nearly invisible front, organizing the logistics of essential supplies for the process of help and saving of animals. It also looks after the cleaning and organization of the place where the animals are welcomed. “To clean the stalls, permanently renew water and food, bathe them and walk with them is part of our missionary routine. We are always attentive to the cares and to some event that demands specific attention from the veterinarians”, comments Juan, one of the volunteers of the Brumadinho Mission. 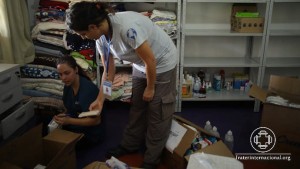 “Our mission is not one of working on the ‘front’, but that of verifying and cataloging the hundreds of donations for veterinarian use that arrive at the centers of attendance. The expiration dates, an organization of the stock of gauze, syringes and first-aid material, implementation of control of these items are actions of little visibility, but they are fundamental for the veterinarians and volunteers to carry out their work”, reports Ricardo Baumgartner, the general operational coordinator of the humanitarian missions of FIHF. 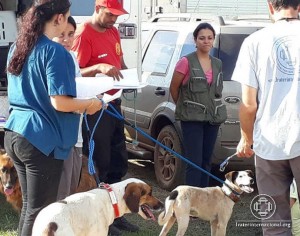 The missionaries of Fraternidade have developed a system of organization of kennels, which facilitates the task of veterinarians and assistants: currently, all the kennels have a number on the door, and each animal has an identification collar. They are also registered in a spreadsheet.

“We brought from the Francis of Assisi Park the method of organization for rescue and care for animals, especially dogs. That permanent work is carried out in Lavras, Minas Gerais, Brazil, in Teresópolis, Rio de Janeiro, and in other localities that are part of the network of FIHF”, reflects Rafael, one of the volunteers.

The missionaries have a loving and respectful way to treat animals, which help a lot in their recovery, after days of tension, uncertainty, physical exhaustion and lack of food. Many animals are found in abandoned houses or properties after the landslide, whether due to the evacuation of the disappearance of their owners. Others are rescued from the mud in which they had gotten stuck.

Assistance with flower remedies of Bach was also a modality that the missionaries used in the first days, when the veterinarian hospital was being structured, to relieve the stress of the rescued animals. 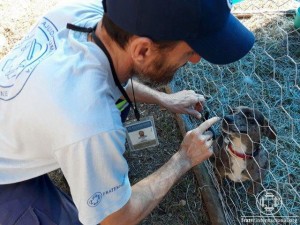 More than 100 animals of several species have been assisted in the veterinarian field hospital: cats, dogs, bovines, horses, hens, ducks, birds and reptiles. Several animals were liberated again or referred to other places.

Brumadinho Mission is the 22nd mobilization of humanitarian help that FIHF has organized since 2011. In this time, it has served in different emergencies, such as earthquakes, floods, fires, assistance to refugees of war, famine and political-economical crises. It has been in 16 countries of Asia, Africa, Central and South America. In Brazil, where it has its headquarters, it has conducted five humanitarian missions.

Get to know how to collaborate with the Brumadinho Mission of Fraternidade – International Humanitarian Federation (FIHF) by clicking: