February 1 to 7, Wednesday to Tuesday 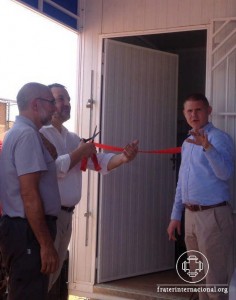 The Pan American Development Foundation (PADF) and the government of Canada have opened a medical clinic and a classroom at the Center of Reference for the Immigrant (CRI), in Boa Vista. The improvements were financed by both partners and built in adapted containers. They will be at the service of Venezuelans, indigenous and non-indigenous, refugees in Brazil.

The ceremony took place on February 5 and had the presence of the Canadian Ambassador in Brazil, Riccardo Savone and of representatives of the PADF (NGO created by the Organization of American States – OAS, to help vulnerable and excluded communities of the Americas), as well as of the UNHCR, of the Roraima State Civil Defense, of the Setrabes and of Fraternidade – International Humanitarian Federation, among others.

In the medical clinic will be offered basic attendance, while in the classroom the children will receive primary education classes and the adults will be able take language and professionalizing courses. 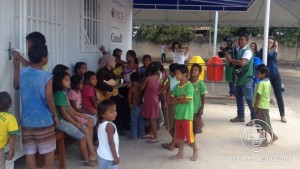 The classes will be given by missionaries of Fraternidade – International Humanitarian Federation, volunteers from the Roraima Federal University (UFRR) and of the House of the Children (Casa de los Niños), as well as Indigenous teachers.

In the act of opening of the new spaces for education and health, ambassador Savone highlighted the “admirable efforts” of the Roraima Government, of the Pan-American Development Foundation (PADF) and of Fraternidade in “seeking the common goal of improving assistance to Venezuelan immigrants and refugees”.

Concerning Canada, he said that the Canadian contribution “is a way of paying a homage to their Venezuelan brothers and sisters, affected by the worsening of the political, economic and social crisis in their country”. He affirmed that “these difficulties are especially challenging for women and girls, as well as for the Indigenous peoples that suffer the consequences of the crisis in a different way that is out-of-proportion”.

Enthusiasm of the artisans 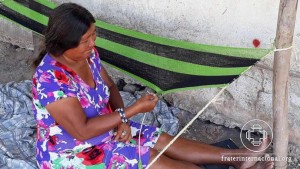 The enthusiasm grows in the group of artisans at seeing their works appreciated and sold in some events in the city. Last week, for example, the group managed to seel 97% of the production, during the National Congress of Universitary Teachers.

The excellent result brought joy to the artisans, who are planning how to conquer more autonomy with artisanship. One of the ideas discussed among them is how to bring their husbands to also work as artisans, which could strengthen the bonds in the family.

How to legally obtain the buriti straw in the surroundings is one of the actions predicted to lower the costs of the pieces. Another topic studied is the strategy of propagation of the works in social network. The support of society has been fundamental and the donations of threads move their routine in the shelter, motivating them for the creation of new pieces.

Representatives of institution of support to the group of artisanship participate weekly in these meetings, such as IMO, the UNHCR and the Setrabes. Besides the specific subjects of artisanship, the topic of violence and of violation were also touched upon. 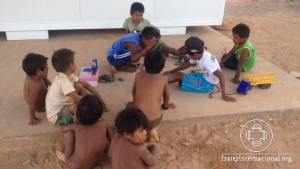 The arrival of newcomers in the shelter is constant. This week a couple of the Eñapa ethnic group was received: she is 16 years-old and her husband is 24.

Meanwhile, the children demand attention, tenderness and cares. Art workshops are held with regularity and, this week, the activities of painting included children from 8 to 12 years old.

In the field of structural improvements, this week the Warao dedicated themselves to the placing of cement to receive the great trash bins stuck with iron. The building of tents to hang hammocks is another unceasing demand.