Week of Tributes to Refugees

The Fraternity – International Humanitarian Federation (FIHF) is having a week of extensive programming in commemoration of the World Refugee Day, celebrated worldwide on June 20.

In addition to the release of the video Nona Anonamo – We are all Artisans, which will play on all the Humanitarian Fraternity (FIHF) communication channels, there will also be a series of recreational and artistic activities in the four shelters managed by the institution in Roraima (Pacaraima and Boa Vista) and in the Transit Shelter (ATM) in Manaus, which include typical dances of the Warao and E’ñepa indigenous peoples, mandala workshops, exhibition of videos, sports activities and games, mural paintings, storytelling and traditional myths, among many other things.

It will be a week to honor and remember the stories of millions of people around the world who had to leave their homes, their places of origin in search of decent living conditions in other countries.

Every minute, 25 people are forced to leave their homes, their places of origin, due to conflicts or persecution, environmental disasters or socioeconomic and political crises around the world, totaling more than 70 million, since 1950. Among them there are 25.9 million refugees, 52% of which are under the age of 18, according to data from the United Nations High Commissioner for Refugees (UNHCR).

Behind the bleakness of these numbers are people who face the impossible to reach a safe place where they could take shelter, receive food, potable water, some initial medical care, and then the next step of receiving help to rebuild their lives while actively participating in the process.

This is the case of the Venezuelan, Carmele, a young mother who for a year has lived in the Venezuelan refugee shelter of the Humanitarian Mission, in Boa Vista, Roraima. In her first attempt to seek refuge in Brazil, she slept on the streets, was cold and hungry, lived in fear of violence, and returned to Venezuela, as she could not bear the absence of her daughter who recently turned 2 years old. Shortly thereafter, back in Brazil and with her daughter, she re-experienced all the anguish from before. Sleeping on the streets and wandering during the day with her daughter in her arms – this time with an aggravating factor: one arm in a cast, as she had been run over by a bicycle. For a month she lived this way, in search of a space in the shelters, always receiving the same answer: ‘we have no vacancy.’ “I had begun to give up. I had a fever, I was tired, and I couldn’t bear the situation anymore. It was at that point that they reached me, saying that a vacancy had opened up in the shelter. Life is like that: when we lose faith, hope comes and with it, better days.”

“To be a refugee is not a choice; it is to have no choice”

Brazil takes in refugees of 81 nationalities; of these, 90% are Venezuelan. Since 2015, close to 4 million people left Venezuela, making this one of the most recent and major crises of forced displacement on the planet. According to a survey by the International Organization for Migration (IOM), there are about 253,000 Venezuelans of both genders who have arrived here since then, especially in cities such as Boa Vista, Pacaraima, and Manaus.

And to respond to the needs of these displaced people and ensure their social and economic inclusion in the communities that have been receiving them since 2016, the Fraternity (FIHF) works jointly with the United Nations High Commissioner for Refugees (UNHCR), The United Nations Children’s Fund (UNICEF), the Welcome Operation, business owners, and the civil society.

According to Friar Luciano, the general manager of the Fraternity (FIHF), which is responsible for five of the 13 shelters for Venezuelans in Brazil, “it is important that we understand that a humanitarian crisis is very different from just a social crisis, because in the humanitarian crisis, people have lost family members, material goods, professions, leaving behind many things built and consolidated, and went into the unknown in a sequence of traumas that can interfere in the search for a new opportunity;” and he emphasizes: “being a refugee is not a choice; it is not having a choice.”

The forced international displacement of indigenous peoples is a situation that requires special attention from the organizations active in humanitarian crises, since the condition of the refugee is compounded by the factor of cultural differences, ensured by international treaties to which Brazil is a signatory. There are already more than a thousand natives of the E’ñepa (Indigenous People) and Warao (Water People) ethnic groups living in the Janokoida shelters, in Pacaraima and Pintolândia, in Boa Vista.

The work of giving shelter to indigenous peoples is unprecedented in the context of a humanitarian response, which led to the search for the elements that could contribute to the building of an environment that was appropriate to their culture and respected their customs and knowledge. Among these measures are the option for hammocks instead of mattresses and tents, preserving the conditions for preparing their typical foods, and the guarantee of a supply of materials so they can prepare their handicrafts, such as Buriti fibers for the Warao, and wood for the E’ñepa. A crisis within the crisis

In the context of the COVID-19 pandemic, humanitarian actors had to adapt the shelter facilities to prevent the transmission of the novel coronavirus. In one of the indigenous shelters, the notification of a positive case of COVID-19 forced the transfer of about 200 people – members of the at risk group and their families – to avoid contagion. Those in the shelters are also making their own cloth masks. Through the partnership with the United Nations High Commissioner for Refugees (UNHCR), it was possible to provide all the materials, such as sewing machines, fabrics, needles, measuring tapes, and irons. With almost 2,000 people in the shelters managed by the Fraternity (FIHF), the purchase of disposable masks became impractical due to the price and the environmental issue, as it would produce an unsustainable amount of waste.

Estimates from the United Nations Children’s Fund (UNICEF) show that among the refugees who arrived in Brazil, in the period between 2015 and 2019, there were about 10,000 children and young people in vulnerable situations. Many of these children will spend their childhood away from home, sometimes alone. Some have only known life as refugees.

In their long journeys, they are susceptible to suffering traumas resulting from abuse, neglect, violence, exploitation, trafficking or even military recruitment.

Valentina, a girl about 12 years old, arrived in Brazil with her grandmother, Miladys. They walked the entire way. Valentina is happy to be in a safe place like the Nova Canaã Shelter, but she still thinks about the situations of thousands of people, adults or children, who were not as lucky as they were. “There are people who stay on the street, who can’t get into a shelter like we did. I don’t know if they sleep, if they eat. I am sad,” she grieves.

Art-education projects involve children, young people, and adults in playful and creative activities that, in addition to serving as recreation for those involved, reinforce the internalization of values that favor resilience and awaken hope in the face of possible traumas arising from forced immigration. Art assists in the expression of content that generates anguish, as well as in supporting its reframing.

In this way, the numbers of the statistics about refugees take shape and transform into Antonios, Eliases, Andersons, Milaidys, Carmeles, and Valentinas. Together, they form new homes, filled with portraits of a world where there is nothing more important than one’s life. 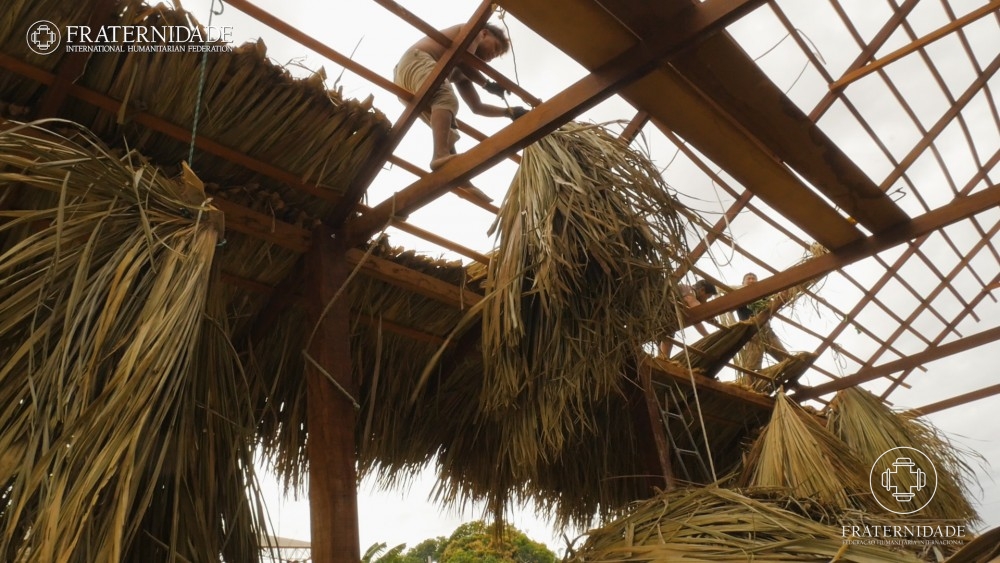