The Light-Nucleus of Figueira in Brasilia, Sacred Kingdoms (NLSR), affiliated with the Fraternity – International Humanitarian Federation (FIHF), brings us stories of support, respect and the self-giving to the animals.

When in 2018, through higher instruction, it was made clear that the area transferred to the Figueira Light-Community was to receive the name of Light-Nucleus of Figueira in Brasilia, Sacred Kingdoms (NLSR), the members of the Central West Light-Network still did not clearly understand how appropriate the name was for the task that was already being done in the area even before housing the Mother of the Sun Monastery.

Located on the banks of the Pipiripau River, the area was already known for providing shelter for horses, abandoned or rescued from abuse by carters. To this contingent of suffering beings, other different species were added. When the Light-Network took on the area, the treatment of the Kingdoms of Nature, done in the NLSR, was intensified and revealed the talents of the members of the group in caring for these vulnerable beings.

“The Animal Kingdom is a sector of planetary life which is the most assaulted, decimated and victimized by the mistreatment inflicted by human beings, who should be its protectors and caretakers, but who feel superior to it, with a right to dominate it and use it for purposes of food, clothing, industries, scientific experiments, etc. This generates an enormous amount of suffering for animals,” affirms Sister Alexandrina, of the Mother of the Sun Monastery.

According to her words, gestures of love, charity, service and  self-giving to the Animal Kingdom help us, as humanity, to evolve. “Through love, fraternity and a new paradigm of relationship between the human being and animals, the human being takes on their real role as tutor to this Kingdom, helping it to recover its purity and essence. It is a joint evolution. And as the spiritual philosopher José Trigueirinho Netto used to say, there is no real evolution in the Human Kingdom without the integration with the evolutionary process of the rest of the Kingdoms of Nature.”

Besides the domestic animals, the NLSR takes in a vast variety of fauna, of wild animals: macaws, toucans, hummingbirds, woodpeckers, kingfishers, cormorants and other birds; turtles, lake fish, opossums, tamarins, tortoises, armadillos, and even an alligator, who coexists in peace with the other species. Also very present are butterflies, dragonflies, stingless bees and other non-venomous insects. All coexist in perfect harmony, giving life to the Light-Nucleus, and a symphony of colors, sounds and movements. “It is our duty to protect this biodiversity, ever-more rare on this planet, and to interfere as little as possible in their rhythms, since they are in balance. All we have left to do is look, contemplate and revere the beauty of Creation. In this way, we make it SACRED!,” declares Sister Alexandrina. 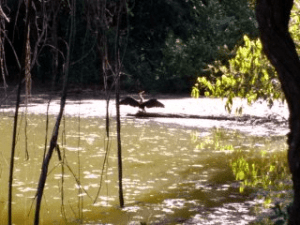 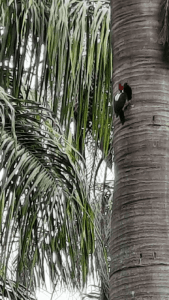 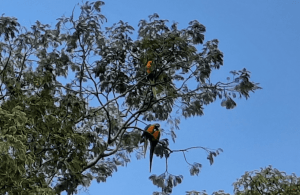 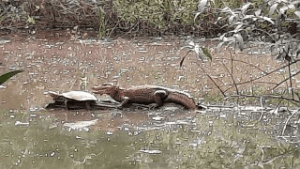 Stories of a loving welcome 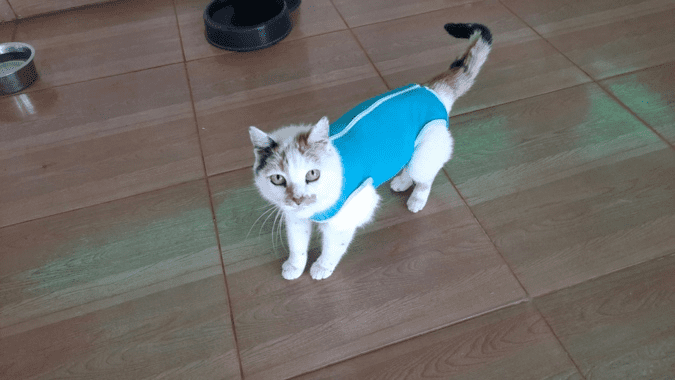 Even though the NLSR has been in formal existence for only three years, there are many stories that show how the Light-Nucleus is a unique place of protection and respect for the Kingdoms of Nature.

One of the female cats of the Light-Nucleus, Cassiopeia, lovingly referred to as “Pépeia,” very wild and rejecting any contact with a human being, developed some grey nodules in the breast region. She was taken to the veterinary doctor, who diagnosed what was already anticipated, which was cancer. She had seven malignant nodules, with the chance of pulmonary and abdominal metastasizing. As a matter of urgency, surgery was performed to remove the nodules. The surgery, tricky and extensive, removed five nodules; the other two would have to be removed at some other time. It was already feared she wouldn’t survive. However, she managed to recover and return to the Light-Nucleus, happily without any metastases.

She came back very thin, half the size, the fur dull, and part of the wound still needed to heal. During Pépeia’s post-operative care and loving treatment, “we observed how each day she was more receptive to our care and love, a very different behavior than her previous one. Cassiopeia accepted a homeopathic treatment very well and allowed us to give injections without resisting, because she knew that it would be good for her,” remembered Sister Alexandrina.

Later, Pépeia underwent a second surgery without complications and returned to the NLSR after a few days. Results of the biopsy: the two removed tumors, previously malignant, were now benign! “In all this, the greatest change was that in the process, she became a loving being and also receptive to our love, expressing gratitude. It was a healing and a profound reconciliation with the human being. The link of trust with the Human Kingdom was reestablished, she is now ready for an evolutionary relationship with us,” comments the sister.

Another cat, Sangha, was the protagonist of a simple story of mischief, experienced by all that were in the area. Maria Marcelino, of the coordinating council of the Light-Nucleus, tells us: “Sangha, frightened by something, climbed a very tall tree, and surprisingly, couldn’t get back down. Various attempts were made to help him, and each time he climbed up higher. He remained three days at the top of the tree. It was necessary to call the Fire Department two times for the rescue. It was a delicate and professional operation to get the frightened cat to come down from the tree. Today, he is calm and has adapted to the kennel.” 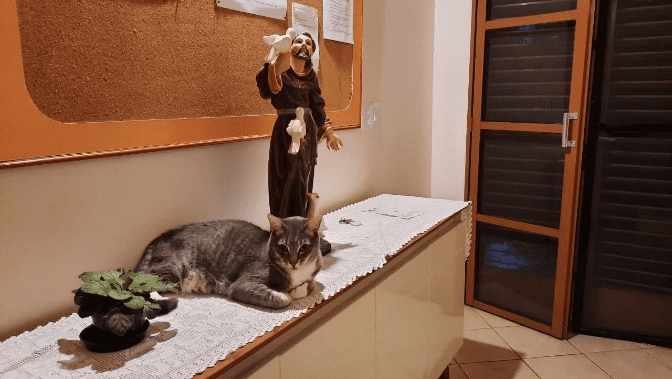 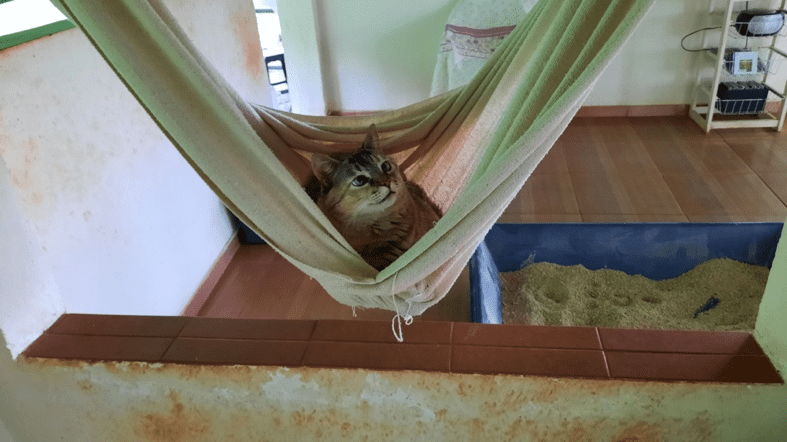 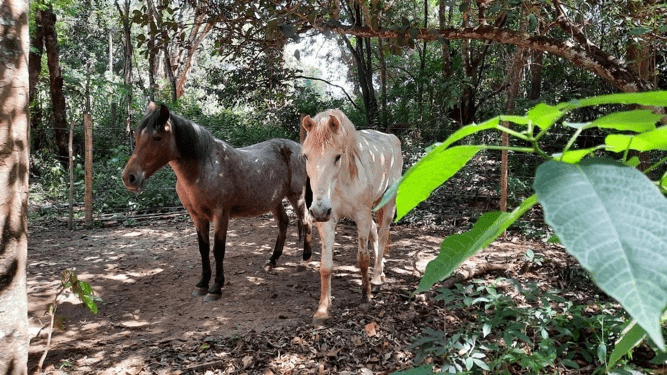 The first animals being taken care of by the Light-Nucleus are the two elderly horses, the Prince and the Princess, that already lived in this place before the group arrived here. Victims of mistreatment and abuse, they were rescued by a local NGO and brought here.

During the morning, they freely circulate through the outer area, and at night, they are put into a corral, where there is an open stall that serves as a feeding station and shelters them from the cold and rain. Recently, the whole area of the corral was planted with grass so they would never lack food.

For the members of the Light-Nucleus it is challenging to take care of large animals because of the lack of experience. But everybody is constantly learning a lot from them. They are very sensitive and intelligent animals with ravenous appetites. It’s necessary to always pay attention so as not to leave food exposed where they roam, because they don’t miss anything! They are the first to try the fruit that falls from the Light-Nucleusfruit trees. They adore jackfruit and mango.

During the times of prayer, they like to be close to us; you can see how sensitive they are to words and the sounds made when the group does the prayers and sings. The skeletal Prince, with problems moving, arthritis and bowed legs, sometimes becomes as lean as a young horse and his posture straightens, participating in a lively way in the work. There was a day when, at the end of the prayer, he even took off galloping fast!

For us it’s wonderful to observe that these animals, already old and having endured suffering, still manage to express something so beautiful in their equine essence, an archetype of strength, power, alignment and beauty.

One of the explanations for such a loving interaction among the Kingdoms can be perceived in the care the group takes when preparing facilities in which the animals perceive they haven’t had their freedom limited, and therefore, don’t feel trapped or a hostage. This can also be perceived “in the care and the affection in treating each animal, from appropriate food and necessary medical care to the care taken of the plants and water,” affirms Maria Marcelino. For her, “all the animals that live there are happy and there is an attunement between the human beings and the representatives of the various Kingdoms of Nature. It is certainly a very enriching exchange,” she states.

“Through that coexistence, many animals can learn different abilities, their degree of intelligence can increase, their capacity for learning can grow, and they can also develop very noble feelings, such as feeling love and fraternity among beings of the same species, and even between different species. We have examples here, in the Light-Nucleus, of animals developing compassion for others, because they feel they are suffering,” emphasizes Sister Alexandrina. She then adds:

“Service to the Kingdoms is a long journey that all of us, human beings in evolution, must take. The rescue of the Animal Kingdom is not just to remove the animal being from a situation that brings them pain and suffering, and providing them with basic care: medicine, food, and shelter. That is just one of the stages in the care and rescue of these beings.

To take care of the deep wounds, that are not only physical, inflicted by humanity on the animal being and which stops a constructive relationship based on love and trust between the Kingdoms, this is also a stage in the healing. The case of the cat, Cassiopeia is an example of this. As she felt this selfless love and dedication on our part to treat her cancer, she gradually transformed and no longer rejected us; on the contrary, she demonstrated acceptance, affection, and trust. In this case, the cancer was her cure.

By trying to rescue the animal, the human being is rescuing the essence of their task on this planet, that of being a caretaker rather than taking advantage of the Kingdoms of Nature. But a conscious and responsible caretaker, aware that as a result of their actions and their self-giving,  they can uplift the whole consciousness of the planet and create a culture of peace, harmony, cooperation, unity, fraternity and love among all the Kingdoms. These would be the seeds of a new humanity on this planet,” concludes the Sister. 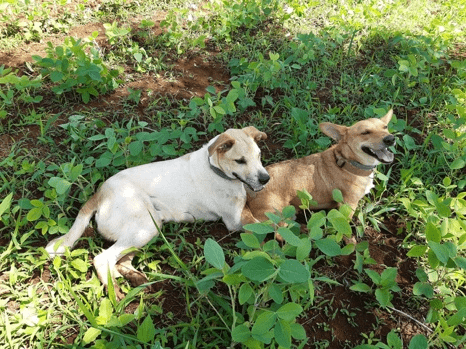 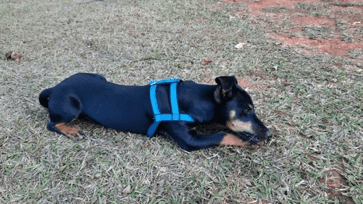