The sustenance of Light in the United States

Learn about the activities carried out by the Brothers and sisters of the Monastery Immaculate Mother of the Holy Spirit, which completes the first anniversary of its foundation, sustaining another focus of light of the Divine Messengers in the United States 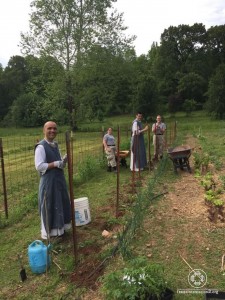 For one year, members of the Network-of-Light of Oklahoma (USA), of the group Calling Humanity and of the Monastery Immaculate Mother of the Holy Spirit, connected to Grace Mercy Order (GMO), have been conducting various voluntary activities in the Sparrow Hawk Village community and in the city of Tahlequah, in the north-American state of Oklahoma.

Last year, the Network-of-Light of Oklahoma added four new members to its group. The group as a whole conducts altruistic service tasks, such as feeding needy brothers and sisters, conducting the maintenance of equipment of the locality and of the Communitarian Church of the Light of Christ, working as voluntary firefighters, taking care of the communitarian organic vegetable garden and participating in a choir, besides coordinating various other sectors.

The Calling Humanity group has carried out the material and spiritual sustenance of the Monastery Immaculate Mother of the Holy Spirit since its foundation, in May 2017. Besides the fundamental material sustenance, the group closely collaborates with the Network-of-Light both in the aforementioned activities and in the conduction of attunements with mantras and group studies of the work of Jose Trigueirinho Netto. Likewise, it also does the translation of the instructions of the Divine Messengers. Aiming at this, every six months, all the members of the group, scattered in other states of the country, gather to update and deepen such instructions.

Focus of light of consecrated life 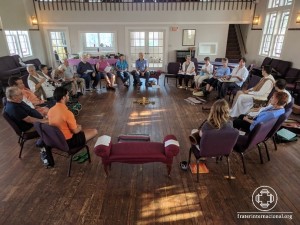 On its turn, the monastery, as a focal point of consecrated life, besides working, as much as possible, with those activities mentioned, seeks to foster, in union with the Monastery of the Resurrection of the Lord of Mount Shasta and with the Nucleus of Sacred Mountain, the spiritual life and the upliftment of consciousness through prayer, chant and service in the different meetings of attunement, most of which are transmitted via internet to all those who are willing to participate.

“The monthly events of the one-thousand Hail Marys and of the 1,200 beads of the Marathon of the Divine Mercy, as well as the weekly prayer for the Indigenous consciousness and the Rosary for Peace in the Nations are important commitments for the sisters and the brothers who accompany the work of the Fraternity here”, comments one brother. In addition, all the broadcast events of the Campaign for Peace are transmitted publicly in the company of the members of the monastery. 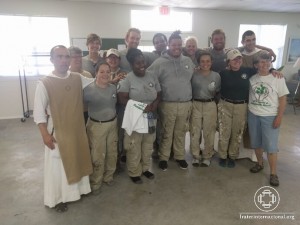 Recently, the community received the support of some youths of the AmericCorps Vista (Corporation for National and Community Service, a national organization of service to the needy), which helped the rebuilding of a house that had caught fire in the region. They also helped in various tasks, such as cultivations in the vegetable garden and in the maintenance of the communitarian facilities, together with the members of the Network-of-Light, of Calling Humanity and of Grace Mercy Order.

In attunement with the Youth Campaign for Peace, the monastery is announcing a new activity. It is a promenade and a cycle of mantras for peace on the planet, which will take place in the vicinity of the Illinois River, on the dawn of the 24th of June. All those who want to unite to foster peace are encouraged to accompany this meeting, regardless of age, social condition and spiritual belief. Families, children and pets are also warmly welcome.

Promenade of Peace by the Illinois River at sunrise.

Circle of sacred mantras and songs for Peace on the Planet.