Normally facing difficulties in survival, with innumerable basic needs not provided, many indigenous communities became even more susceptible and helpless because of the worldwide pandemic caused by the coronavirus.

Knowing in depth about the complexity of the situation that these human beings were experiencing, groups of the Planetary Light-Network, which are part of the Fraternity – International Humanitarian Federation (FIHF), remained committed and determined to continue with the support they were already offering.

One of them, the Joinville Light-Network, together with various organizations of the region, helps approximately 640 people, besides the 70 dogs under their care, with the collection and distribution of various essential products for survival, such as food, provisions, and medication for the dogs. Regarding the supplies for the Animal Kingdom, they have the support of the Balneário Camboriú Light-Network. The eleven indigenous villages of Araquari, Barra do Sul, São Francisco do Sul, Garuva and Mafra are receiving food every two weeks. “At this moment in the pandemic, we act in the sense of minimizing what is lacking, easing the suffering, and offering solidarity to this vulnerable segment of society,” says the collaborator Luis Alberto Siqueira.

The help, which they had already been providing, was redefined with other parameters, through virtual connections with organizations and collaborators to obtain donations, transportation, suitable hygiene, and distribution, while always strictly observing the safety and preventive measures established by the official health organizations. 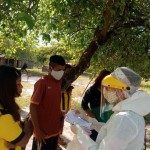 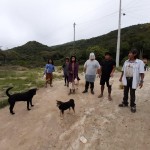 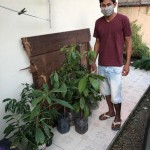 Luis Alberto points out that all the products related to indigenous survival are being taken to the Special Secretariat of Indigenous Health (SESAI) to be sanitized and delivered by that organization to the villages.

“The task must continue while there is a lack in the basic needs for survival of those original peoples of the region,” affirms the collaborator.

In the same way and with the same awareness, another group, the Paraguay Light-Network, works in the delivery of food to seven indigenous communities of the Alto Paraná, called the Mbya Guarani and Avá Guarani, in the region of Ciudad del Este, on the border with Brazil.

The collaborator Adriana Vallet explains that it is an ongoing task that cares for around 600 people. “The Paraguay Light-Network, with the help of collaborators of Argentina and Brazil, continues with the work begun by the missionaries of the Fraternity (FIHF), in 2016.” Regretting that the group, because of the pandemic, cannot be personally present in the villages, Adriana clarifies that “even with the quarantine, we are able to continue with sending the food, because we know that those communities are in great need, both because of their extreme poverty and because they don’t have their own land.”

Initiatives such as these show that the members of the Light-Network are imbued with the purpose to act for the common good, through donations, not only of material food, but also the gifting of their hearts, so that through the service, love may be established on the whole planet, according to what the manager of the Planetary Light-Network, Mother Maria Cleonice, expresses: “those actions help to weave hope into the lives of those who suffer and generates an example of determination and courage so that this world may set aside indifference and oversight.” 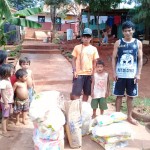 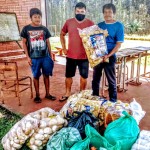 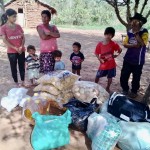 Follow other actions of the Planetary Light-Network for the indigenous peoples: