The Fraternity takes Community-of-Light of Figueira and House Light on the Hill to Três Pontas, unifying cultures and races

The Fraternity – International Humanitarian Federation promoted on this last November 21 a confraternization of different cultures and races with children of the towns of Carmo da Cachoeira and Três Pontas, both in the state of Minas Gerais, Brazil. The children made choir performances and participated in a Mass of the African Pastoral.

The children of the Tibetan Park School are members of the Community-of-Light of Figueira, many of them from different countries of the world.the children of Art Education School are resident in the town of Carmo da Cachoeira, Minas Gerais, Brazil.the children of Três Pontas participated in the Social Project Arte Cotidiana (Everyday Art), which also collaborated in the creation and organization of the event. 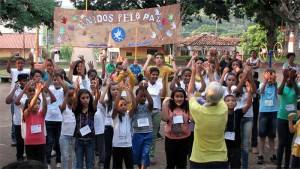 The activities started in the afternoon, in the square in front of the Church of Our Lady of Graces in Três Pontas, in a moment of integration, conducted by Sister Martzthá, of the Monastery of Silence of the Grace Mercy Order. Then the children performed songs with the theme of Peace.there were choir performances and songs with African rhythm. Afterwards all the children participated in a Mass of the African Pastoral. 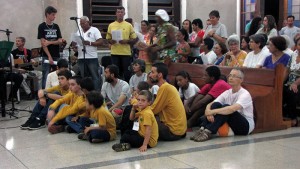 According to Father Rogério, of the Church of Our Lady of Graces, the Mass of the African Pastoral was created by Reginaldo Veloso na cidade from Recife, Pernambuco, Brazil. It is also know as Criola Mass, and was idealized with the aim of increasing the participation of the people of African origin at Church. One of the differences is that the mass is more danced, being chanted in the Yoruba Language. It is in joy and relaxation that black people express their faith. 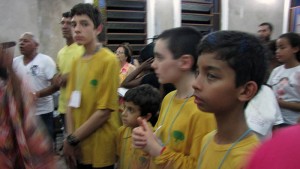 The chants loaded with devotion resonated with power throughout the church, helped by the sounds of the African instruments.the vivid and joyful colors of the participants dressed in costumes from that continent, dancing in front of the altar, stirred all. During the Mass, the spirit of Fraternity created Union among the different peoples and races represented by the children present there. 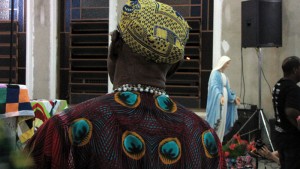