The Fraternidade will create a permanent base of Missionaries in Boa Vista, Roraima

Aiming at establishing a permanent base of services in Boa Vista, capital of the State of Roraima, in the extreme North of Brazil, a fourth group of missionaries of the Fraternidade – International Humanitarian Federation, has travelled to this city, and will continue the Humanitarian Roraima Mission of support to the Venezuelan immigrants. The delegation arrived in its destiny at noon of December 15, Thursday, and will remain there until January 4, 2017, when they will be replaced by a fifth group. 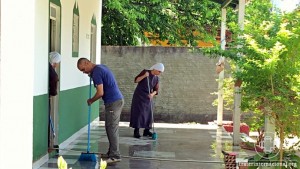 Nucleus-of-Light of Figueira in Boa Vista

The permanent base to be created, at the request of the Divine Messengers, will function at a House of Saint Joseph that will be founded by the Fraternidade and will fulfill complementary tasks to those fulfilled by the Nucleus-of-Light of Figueira in Boa Vista, which is also being implemented.

The group that has travelled now is composed by 11 volunteers, of which two are Venezuelan. One of them will stay to be a part of the executive board that will coordinate the Nucleus-of-Light of Figueira in Boa Vista.

The volunteers will join the monks and nuns of the Grace Mercy Order that are at service in that region that borders Venezuela, as well as collaborators of the Network-of-Light, the volunteers that are manifesting in the very city of Boa Vista and the officers of public sectors that  begin to support the task. 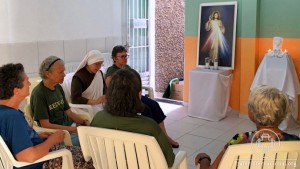 Synthesis
“This fourth group goes with the intention of sustaining what has been obtained, organizing the voluntary help that is growing and promoting its continuity, as well as continuing to work to reach another objective: obtaining a permanent place where the refugees who have no place to go can spend the night. We also need more voluntary support from the professionals of the region in the area of health. We will continue with our prayerful task and of diffusion of the codes of fraternal life that we know”, described Clara, the coordinator of the fourth missionary group.

Making a synthesis of the 44 days that the mission has taken so far, she said that the first group of missionaries opened the doors, obtaining an important support from local commerce with donations of food, clothes and medicines; the second group deepened these contacts, awakening the interest of other charitable groups and of the public sectors, obtaining the first concrete response from the governmental sector: the inauguration of the Center of Reference to the Immigrant (CRI).

In the meantime, the third group, that will leave Boa Vista on the upcoming days, developed its task in the CRI, adding its efforts to the collaboration offered by the inhabitants of the region and by the very Venezuelan in the area of health, in the sector of Law (documentation of the refugees), in the provision of food and in the care to the minors.

Clara reported that many refugees arrive in the region, not only from Venezuela, but also from Cuba, Haiti and from the Guyanas, seeking better life conditions. Graduate professionals, technicians, and also uneducated people arrive, who for the moment survive by rendering different services on the street, in the houses, and live camped in some neighborhoods of Boa Vista. According to official data, there are 6 thousand registered immigrants in this city, while in the whole State they are over 30 thousand. There are also those not registered, mostly Indigenous, who rotate constantly.

The Humanitarian Roraima Mission was requested by the Virgin Mary in a message transmitted on October 24, 2016, through the visionary monk Friar Elías del Sagrado Corazón, of the Grace Mercy Order. The Mission has the purpose of alleviating the suffering of those who, forced by the acute lack of food, medicine and jobs, and the uncontrolled inflation that plagues Venezuela, abandon their homes, by themselves or with their family, in quest of the light of hope.