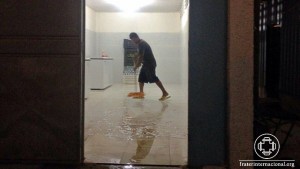 The missionaries of Fraternidade – International Humanitarian Federation – distributed food to those sheltered in the House of Passage, where Venezuelan immigrants are housed in the city of Pacaraima, Brazilian border with Venezuela.

After the delivery of the food, the Indigenous people did a general cleaning in the storage.

The Federal Police asked for a meeting with the Aidamos, the Indigenous leaders, due to the suspicion of thefts of bicycles in the city of Pacaraima and of burglary to houses near the shelter. The affected residents blame the Indigenous people. 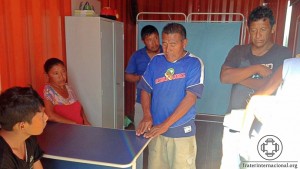 A rainy day in Pacaraima, and a very intense day for the team of missionaries.

The personal hygiene kits were delivered and census was made to update the number of immigrants in the shelter.

Juliana, a representative of the United Nations High Commissioner for Refugees (UNHCR), visited the House of Passage and participated in a meeting, getting informed of the progress and deadline of constructions that are being made in the shelter.

In the morning, there was a meeting of the team of missionaries with Clara, the coordinator of Humanitarian Roraima Mission.

In the afternoon, there was a meeting with the presence of the social assistant and the psychologist of the Roraima Labor and Social Welfare Secretary (Setrabes), to deal with the habitual conflicts in the shelter.

Organization of food products that arrived for distribution on the following day.

It is a noticed fact that the health sector is fairly often requested, practically every day: children with worms and dermatitis, help to pregnant women and accompaniment of sick people to hospital and to health centers for medical attendance.

Another activity developed every day is artisanship, according to the interest of the sheltered and to demand.

The day began with a meeting with the team of Setrabes: the manager, the social assistant and the psychologist with the Aidamos. The objective was to find solutions for the conflicts of all kinds that arise among the sheltered. It was talked about the maximum time of permanence in the shelter, of three months. The reason for this deadline consists in making it possible  greater flux of people in the shelter. It concluded with a deed of undertaking in which the Aidamos made the commitment of communicating to their family groups the situations discussed in the meeting and the determination about the time of permanence.

Then, there was de donation of foods, in which each family receives according to the number of people that integrate it. On this day, during the distribution, there was the visit of the Mayor of Pacaraima, together with a delegation of the recently elected Mayor of Santa Elena de Uairen, of Venezuela. They came to ask for information about the work and to learn about the situation.

Visit of the Secretary of International Management of the State of Roraima, Fátima Araújo. The objective was to get to know the House of Passage and the reality of the Venezuelan immigrants that arrive daily at the shelter. In this meeting, were present the social assistant of Setrabes and members of the Fraternidade. The Secretary was deeply interested in helping the work that is being developed and also was willing to learn about the situation of those who are outside the shelter, mostly non-Indigenous Venezuelans who are scattered in a great part of the city.

The constant arrival of Warao Indigenous people seeking refuge in the House of Passage concerns the group of missionaries due to the infrastructure issue: lack of equipment, space, hammocks, mattresses, blankets, etc. the place can harmoniously house 196 people, in contrast to the 351 sheltered currently staying there. It has been determined that in the current conjuncture no one else will enter.

In addition, non-Indigenous Venezuelans arrive daily at the shelter, seeking for help, guidance and above all food. This is the most critical point in the Venezuelan crisis at the moment: food. They arrive with the hope of finding a place to sleep, or, if not possible, some food. The House of Passage cannot attend them. The person who is offering food in Pacaraima outside the shelter is Father Jesus, who, from Monday to Friday, offers breakfast.

The manager of the House of Passage has determined the apprehension of the radios used by the Indigenous people. The devices are playing nearly all day long, even at night, disturbing sleep. This was generating several conflicts. So, the radios are collected at the end of the afternoon and are only distributed on the following day.

The missionaries took a pregnant woman to hospital, and she gave birth there.

During the census, it was confirmed the increase of the migratory flux day after day. This fact is generating a complex context, as neither the structure of the shelter nor the amount of donation accompanies this increase.

As the situation if Venezuela is unchanged, some Indigenous people fear the determination of permanence in the shelter of, at most, three months.

A visit of informal character of an officer of the Brazilian Consulate in Santa Elena de Uairen took place. He heard comments about Pacaraima and headed to the shelter, to have a closer view of the work.

In the morning, the team of missionaries received the Monastery of the Grace Mercy Order installed in the city of Boa Vista, together with other members of Fraternidade – International Humanitarian Federation. There was a team work of healing and restoration.

In the afternoon, the group went to the shelter and conducted some daily health attendance: bandages, nebulization, individual cares and family conflicts mediation.

Three Warao Indigenous families (15 people) and other non-Indigenous  people came from Venezuela. Reports about the Venezuelan nation: lack of medicines and of medicines and great insecurity. The missionaries registered the newly-arrived, talked and explained the current condition in the shelter. In general, those coming understand about the impossibility of housing, but the scenario is unsettling, because it is not possible to attend everyone who is arriving.