January 29 to 31, Monday to Wednesday

Before the distribution of foods, there took place the visit of the Military Commander of Amazon, General Miotto, of the Brazilian Army, and his delegation. They visited the House of Passing, talked with the community, and promised to refer the demands to the Federal jurisdiction.

The missionaries made the distribution in a simpler way: the foods and the hygiene/cleaning material were distributed at the same time. The act took place inside the deposit, with the help of the Aidamos (Indigenous leaders).

A child who had arrived at the shelter the day before was taken to hospital and then hospitalized in a serious state: dehydration, malnutrition, diarrhea, pneumonia and suspicion of tuberculosis.

Visit and accompaniment during the day of three members of the United Nations High Commissioner for Refugees (UNHCR). One of the members will be available for the team of missionaries of Fraternidade – International Humanitarian Federation, from Monday to Wednesday of this week.

About the time of permanence of three months, no conclusion has been reached to put into effect actions because the intervention of the City and Federal Governments will be necessary in this situation. There are people in the shelter who will complete three months of stay on the 2nd of February.

A Warao Indigenous person needed to be removed from the shelter because he was drunk and threatened to physically batter his wife. The wife was accompanied by the psychologist of the Roraima Labor and Social Welfare Secretary (Setrabes) to register complaint at the Police Station.

The migratory flux continues to be intense. In spite of all warnings, people keep entering and lodging in the shelter, indifferent to the material and security conditions. Most of them are relatives and friends of people who already are in the shelter.

The habitual health procedures were made. There are currently a great number of children with respiratory problems. Seven people were accompanied to the health center for a more detailed medical attendance. Pregnant women were taken to the prenatal program.

Meeting with the UNHCR, Setrabes and Fraternidade to share experiences and information.

During each week of this month, from Monday to Wednesday, a member of the UNHCR will stay in the House of Passing.

The Aidamos presented a proposal of extension of permanence. Nevertheless, the deadline agreed upon, which is part of the internal regulation, will be kept. It was highlighted that the process of leaving will have the accompaniment of the technical team to evaluate the situation of each family, such as pregnant women, single women and with children, people with special needs, older people, sick people, children without parents or responsible people. According to the missionary Luis, this is a “multifaceted situation that will demand from the team a great effort to evaluate all these conditions”.

People who are alone, single and who do not have family have the limit until the 6th of February. Many Aidamos report they have no options outside the shelter or conditions to leave, as Pacaraima is a little town and to find a job is very difficult.

The police came to the shelter due to the Police report made the previous day by the woman who suffered theats from her drunk husband. It was 8 p.m. and the missionaries had to leave. So, the Aidamos gathered to warrant protection to the woman and her children, in case the husband returned.

The House of Passing has no police protection or effective security because the military police of Pacaraima has no personnel to do this kind of work.

Luis ends the report of this day commenting that “in the face of so many conflicting and complex situations, we perceive, even partially, an atmosphere of uncertainty and insecurity among everyone. We know there is a deeper and hidden meaning in all this and it is in this faith that we continue”.

The day began with the the accompaniment of an Indigenous woman to the Police Station to register a complaint for having been battered by her husband who after the fact left the shelter and probably returned to Venezuela. According to the reports of those who live in the shelter themselves, this kind of conflict is something habitual.

Health attendance and accompaniment to hospital, especially of children with respiratory problems. The dusty environment, the cooling of the temperature at night and the collapse of the cesspools create an environment that propitiates diseases, especially among the little ones. The full cesspools bring about other kinds of diseases. 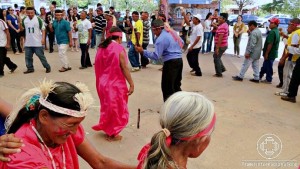 The psychologist and the teacher that are agents of Setrabes began a work with the youths. The objective is to rescue the roots of the Warao people and to organize a cultural festival. They began with the learning of a typical Warao dance, and the participation of the youths was very significant. According to Luis, a missionary of Fraternidade, this was “a more joyous and softer moment within the dense context that is being lived at the moment”.

Received the donations of foods, which after all the logistics of organization, will be distributed tomorrow morning.

The repeated entry of new Warao people in the shelter in hours when the missionaries are absent increases the number of those not registered. The structure of the shelter, already very precarious and without perspective of expansion, has the capacity for 200 people, but has almost 400. The situation is of concern, because people enter, but do not leave.

The team is living a very delicate situation: the mission of attending all contrasts with the lack of material means.