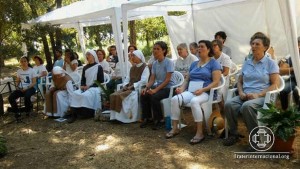 After three months of pause, due to the pilgrimage of the Campaign for Peace in Europe, the Marian Center of the Most Pure Virgin Mother, in Dornes, Portugal, resumed its monthly activity of prayer of the one Thousand Hail-Marys on September 23.

The spiritual impulses generated during the pilgrimage of the Campaign for Peace in Europe awakened many souls, which made it possible for several people to formally consecrate to the Immaculate Heart of Mary.

The Marian Center of the Most Pure Virgin Mother, located in the Community-of-Light of Fleur-de-Lys, welcomed, with much love and devotion, about 40 pilgrims, who elevated their hearts by means of the prayerful exercise of the one thousand Hail-Marys. 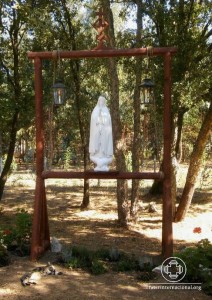 The activity also had the presence of the Monastery of the Grace of God, of the residents and permanent members of the Community, of members of the Network-of-Light of Europe, of collaborators and of pilgrims who had their first contact with the Marian Center and with the Community.

During the whole day, at the same time, a permanent vigil of Adoration of the Blessed Sacrament took place. As, on the day before, the 2nd Meeting for the Formation of Adorers had taken place, there was also the continuity of the interviews of those who offered to begin a period of experience as members of the civil branch of Grace Mercy Order: the Adorers of the Mystical and Eucharistic Body of Christ.

The event elapsed in peace, harmony and union, and ended with the ceremony of the Ecumenical Communion.

In the end, all the participants manifested, with joy and Faith, the firm intention of participating in the one thousand Hail Marys in October.