January 1 to 3, Monday to Wednesday 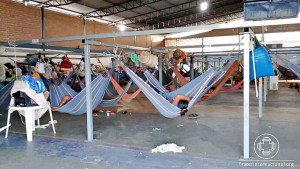 On Monday, January 1, the Missionaries of Fraternidade – International Humanitarian Federation, had a meeting to evaluate the situation of several immigrants who were drunk. There were fights and some were taken to the police station.

“When we arrived at the gymnasium, we saw that most people slept heavily on the hammocks. Those who were awake, with tired eyes, told us they did not sleep during the night because of the noise, parties and mess”, said Alexandrina, a missionary of Fraternidade.

“On this day there were many warning and expulsions. It was necessary to make a police report at the police station and we had an immigrant who battered his wife”, explained Claudia, another missionary of Fraternidade. 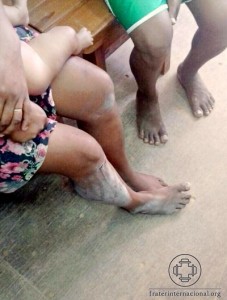 The Portuguese class continued with a new member, a fourteen-year old boy. The other immigrants did not attend, because they were sleeping.

The external area of the Center of Reference for the Immigrant (CRI) was cleaned, with the help of an elderly couple.

A donation of soup was received, and was directed to another place, as dinner had already been served in the shelter.

Many immigrants wanted to leave the CRI after 8 p.m., but were instructed to remain in the shelter.

A theft of a bag of recyclable trash (soda cans) was detected, which had been collected by an immigrant for selling.

Portuguese class had the participation of several immigrants.

Due to the great mess in the gymnasium, with bags of clothes and containers with leftovers, it was asked for the immigrants to harmonize the place. 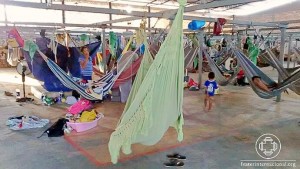 Two policemen went to the CRI to deliver a subpoena, but they did not find the person.

Volunteers arrived with donations, and were taken to the office of Fraternidade in Boa Vista.

Games with children were played.

The team of the Roraima Labor and Social Welfare Secretary (Setrabes) of the shelter, two representatives of the United Nations High Commissioner for Refugees (UNHCR), missionaries of Fraternidade and two Indigenous leaders gathered to solve the conflicts of the previous day. They talked with the man who battered his wife and warned two youths who had jumped over the wall of the shelter.

A representative of the Special Protection Department, with a member of the UNHCR, checked pendant services (electric connection, water and sewage plumbing) of the containers donated by Canada, located  in the shelter.

Connection of drinkable water in the toilet of the container destined for health.

Medical services were rendered at general clinic by the team of the Special Indigenous Health Secretary (Sesai).

Immigrant quarreled with his wife and threatened their daughter. He was invited to leave the shelter. The wife said her husband wanted to give the daughter.

Delivery of packages of diapers.