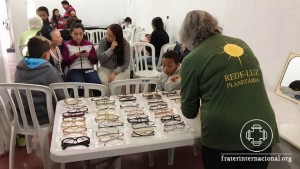 Collaborators of the Nucleus-of-Light of Figueira in the city of Sao Paulo, affiliated to the Fraternidade – International Humanitarian Federation, have developed a support service for needy people with vision problems, who live in Carapicuíba, Brazil, city where the Nucleus-of-Light is located. For this, it counted on the collaboration of professionals of optometry, who carry out the evaluation of the patients and indicate, when necessary, prescription eyeglass.

On June 22 lenses were delivery to 57 beneficiaries, among children, youth and adults. This action was developed for hours during the afternoon, in the community hall of the Sao Miguel Church, located in Vila Tonato, and had the support of nuns of the Grace Mercy Order. On that occasion the community leader, Mrs. Maria Faria, was honored for her birthday. 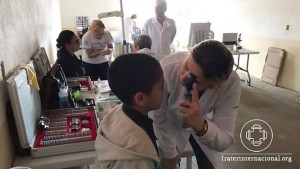 The delivery of the glasses culminate in an assistence that began was on May 7 with day of consultations with optometrists. This time, seven professionals attended a total of 74 people of all ages and were assisted by 18 volunteers of the Nucleus-of-Light and of the Network-of-Light of Sao Paulo. The service and the glasses were funded by donations from collaborators and individuals.

It was the second grup activity to support neighbors wiht vision problems. The first one was held at the headquarters of the Nucleus-of-Light in Sao Paulo, in April 2016. At that time, a volunteer optometrist attended 26 children and adults, in two shifts (morning and afternoon). To be possible, previous training with collaborators of the Nucleus-of-Light was carried out. On that day, it was shared the snack and lunch. 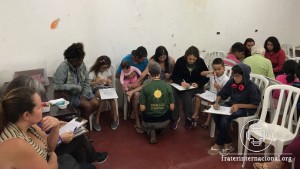 This service arose from the meetings that the group of the Nucleus-of-Light of Sao Paulo organizes every Thursday, for five years, with children and mothers from Carapicuiba. In this coexistence, several need are identified that are being met as much as possible. Some actions already taked include distribution of food, clothing, footwear and toys, support for housing reform with construction work, provision of materials and furniture as well as health care, with the follow-up of medical consultations and treatments.

The volunteers of Nucleus-pf-Light also offer to these families training and internalization activities such as workshops of alfabetization, confection, loom, knitting, drawing, mandala, kitchen,body awareness exercises, debates, among other activities.

“The gift of your group of souls is the service through healing, healing which you will discover by the act of prayer and of union entrusted to My Immaculate Heart. Now, at the gates of your lives, there will come suffering souls, solitary and empty, who have long not met the God of Love”.

(Message transmited by Mary, Mother and Mrs. of Charity, to the visionary Friar Elías del Sagado Corazón in the Nucleus-of-Light of Sao Paulo, in June 24, 2014) 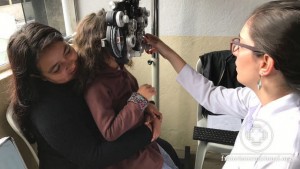 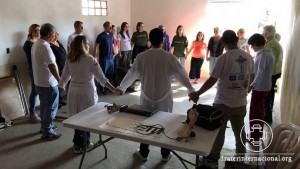 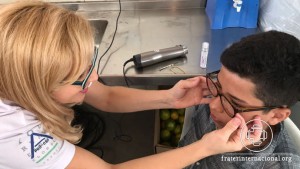