In the afternoon, there was a meeting at the house of father Jesus, with the presence of the Justice prosecutor, the Aidamos (Indigenous leaders) and representatives of Fraternidade – International Humanitarian Federation. The main topic was security in the House of Passing, but also the care for the children, as at the moment they are receiving criticism from the population of the city. 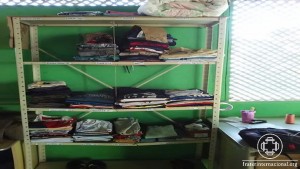 Breakfast was offered in the house of father Jesus, as happens every week, from Monday to Friday. 700 people altogether were served.

Distribution of food almost the whole morning, as there are many families, and the food is distributed according to the number of people.

The organization of donated clothes continues. As the clothes are insufficient, the distribution is made according to the number of people of each family. The rule is one article for each person.

Register of the ones who stay in the shelter

The United Nations High Commissioner for Refugees (UNHCR) began an action to register the people who live in the House of Passing. This action began at 5:30 a.m. and extended until late afternoon.

Attendance and health referrals increase each day, the most frequent of them being: bandages in general, respiratory problems, skin diseases, diarrhea and fever. Some cases aggravate with the unhealthy conditions in the shelter, and many sleep on the floor or over cardboard and without sufficient warming. 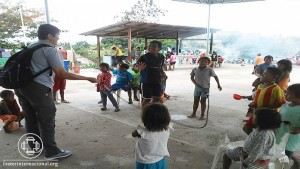 Children of the shelter

Today was a special day for the children, who made a promenade on the streets, singing on the way to the house of father Jesus. This movement attenuated the image of the little ones, which was being very much criticized in the last days due to the incidents. The meeting had the participation of a sister from the Children’s Pastoral and of a missionary from Santa Elena de Uairen.

Visit of members of the International Migration Organization (IMO) and of the Federal Public Ministry. On the occasion, they talked with the Aidamos and with people from the community.

Meeting at the house of father Jesus with the Bishop of Santa Elena de Uairen and the parish priest of Tucupita, capital of the state of Delta Amacuro, Venezuela, a region from where comes most Waraos that are in the House of Passing. They related the reality, the historic and geographic aspects and the reason of the immigration of the Indigenous people, especially of the Warao.

The registering begun the day before by the UNHCR continues. Although more people have been registered, not everyone was.