“God sleeps in the mineral, dreams in the plant, awakens in the animal, becomes self-conscious in the human being” – Old Eastern thought

On the 18th of October of 2017, the Youth Group of Belo Horizonte, affiliated to the Nucleus-of-Light of Figueira of Sacred Sky, promoted a meeting whose topic “A spiritual outlook of the Kingdoms of Nature” attracted many youths and adults to reflect about this theme.

Occult aspects of the Kingdoms of Nature 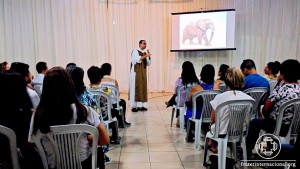 The study took place in the Children’s House, a Nucleus of Service connected to the Nucleus-of-Light and was conducted by a monk of the Grace Mercy Order who talked about occult aspects of the Kingdoms of Nature. According to friar Thomas, a Kingdom is a sector of universal life, a stage and a field of evolution. In it, consciousness develops attributes and acquires learnings. The Human Kingdom corresponds to the conscious aspect of the planet; the infra-human kingdoms (the Animal, the Plant and the Mineral Kingdoms) correspond to its subconscious.

During the sharing, it was also said that from a perspective of cosmic evolution, the Animal Kingdom and the other infra-human Kingdoms have the Human Kingdom as a goal that, somewhere in the cosmos, they must reach in the future. Another important explanation was that the degree of evolution of consciousness in the Kingdoms is revealed by the externalization of their inner light. For example, in the Mineral Kingdom, this externalization originates gems and precious metals and crystals, whereas the plants have a very high degree of absorption of the energy of the Sun and their growth toward the Light reveals their devotional and ascensional nature.

Intercommunication with the Animal Kingdom 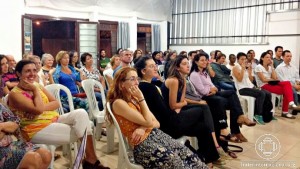 Besides the study, there was the exhibition of the film “Intercomunication with the Animal Kingdom”, which shows experiences of conscious communication between human beings and animals. The film reports several situations in which Anna Breytenbach, “an animal communicator”, talks with several animal species, demonstrating the possibility of this kind of contact and revealing the service that can be offered to the kingdoms through this ability of intercommunication.

Elevation and expansion of consciousness 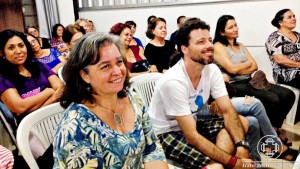 The meeting also served for the dissemination of the Youth Campaign for Peace, which has as a principle the unity with the essence of Nature.

The instruction about the spiritual aspects of Creation transmitted during the study contributed for the generation of a movement of elevation and expansion of consciousness, empowering people to become more responsible about their role within the evolutionary chain. As Trigueirinho say in the entry “Animal Kingdom” of his Glossário Esotérico (Esoteric Glossary), page 402: “Man should be, for the animal, the intermediary of the emanations of the Spiritual Kingdom”.

This verse of the song “Mensaje de los Reinos” (Message of the Kingdoms), of the CD Blanca Esencia (launched by Irdin Editora), represents well the impulse manifested in the meeting:

“We are one Kingdom in Love / We are all one in the Original Source”. 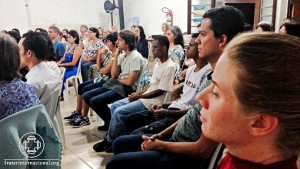