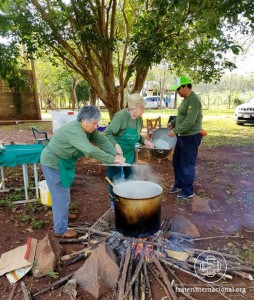 During the Seventh Meeting of Paraguay Mission, members of Network-of-Light groups of Paraguay, Argentina and Brazil have visited the Indigenous villages of Mbya Guarani and Ava Guarani, located in the Eastern region of Paraguay, bordering Brazil and Argentina. The activity took place during the weekend from June 30 to July 1st, 2018.

On Saturday, the 30th, the volunteers – eight Paraguayans, eight Argentinians and two Brazilians – spent the day with the community of 8 of December, a nucleus of approximately 20 families. Benefitting from the sunny day (the day before had had a heavy rain), some collaborators went to nearby villages to distribute donations of food and blankets. They were in Puerto Bertoni, Puerto Barreto, Puerto Jimenez and in Yvu Pora Renda. On Sunday, the group went to the community of Puerto Flores, where about 30 families live.

The natives supported by Paraguay Mission belong to the Mbya Guarani and Ava Guarani ethnic groups, and they are descendants of the Guarani Indigenous people. They survive in precarious conditions of food, health, lodging and instruction. 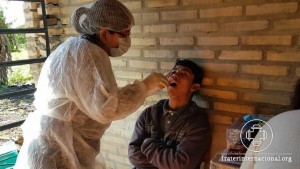 One of them, Carmen Pintos, manifested she feels very happy to support Paraguay Mission. She also highlighted the advances observed in the infrastructure of the assisted communities. “When the leader assumes his function and is loyal to their community, the results are very perceptible”, she said.

“I always feel very good at giving a little speck of sand to these people who need us so much. I always say that if we have had opportunity to study, we must be grateful and give a little of our time to social work”, stated on her turn Gladis Díaz Lavigne, the other dentist. 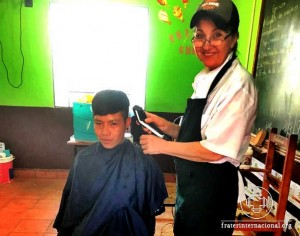 Attracted by the opportunity of helping the Indigenous peoples, several volunteers of Ciudad del Este, the base of operations of the group on mission, joined the Network-of-Light.

The cooperation with the representatives of the Indigenous Consciousness also included little services such as haircut, hair-wash and feminine hair-dress.

“I return to my country impressed by the group work in which I had the opportunity of participating. I have experience of service to the Original Peoples in the province of Misiones, Argentina, but it is the first time that I feel love and fraternity in such a lively way”,

Sebastián Niveyro, from Posadas, who was also present for the first time, praised the warmth of the group and its organization. He added that “the Indigenous communities are

very warm and have a lot of respect for us, with the little that we bring they feel extremely happy and grateful”.

Paraguay Mission is part of the Mission with the Original Peoples, a campaign of Fraternidade – International Humanitarian Federation. It began in June 2016, when 20 missionaries of Fraternidade and of the Network-of-Light of Paraguay visited, during 14 days, three Indigenous communities of High Paraná, bringing medical, dental, emotional, spiritual and material support.