Humanitarian Roraima Mission – Pursuit of Harmony in the Shelter 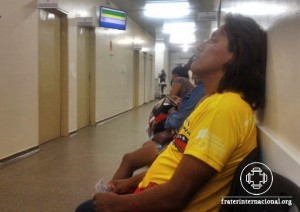 The team of missionaries of Fraternidade – International Humanitarian Federation, began the day being informed of an act of vandalism: two sinks had been plucked from a toilet in construction and thrown in a declivity in the House of Passage. Then they were found and put in their right place. It was not found out who did this.

Because of the excessive number of immigrants, the food distributed in being divided in small amounts. Some items do not reach everyone.

Concerning health, besides the usual attendance, were referred to hospital some people with respiratory problems and one with severe infection. They returned to the shelter without the necessary medicines, because they were not available at the hospital. 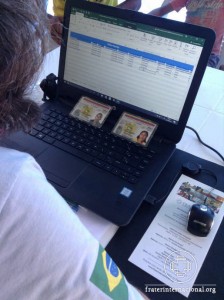 Census of the population

An indigenous man got drunk during the night and quarreled with his wife and with other people who were near his tent. The missionaries asked him to leave the shelter: he left without any problems, but he returned many times. At last, it was asked to the other Aidamos (Indigenous leaders) to take care of the situation. This family has been facing difficult moments: health problems, besides the issue of alcoholism of the father.

Contexts such as the one described above disturb the harmony of the environment. The missionaries work every day to maintain harmony and balance in the shelter. In the last days, the mood is exalted because of carnival.

After permission from the United Nations High Commissioner for Refugees (UNHCR), the team of missionaries registered in the census the families that arrived from the second of February on. The shelter currently has 492 people and immigrants continuously arrive to meet their family members.

Visit of the Bishop of the Diocese of Boa Vista together with some nuns that specially take care of the matter of immigration. The group visited the House of Passage and offer support in whatever is necessary.

Attendance to persons with dehydration, malnutrition, diarrhea and headache. Some have dental infections, but at the moment there is no anesthesia for dental service at the health center. 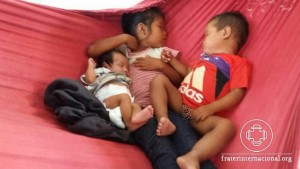 The storage was harmonized to receive food donated that will be distributed tomorrow.

The artisan work done by women continues with the making of necklaces.

Before the distribution of foods, there happened an informal talk with those who stay in the shelter and the Indigenous leaders. Some points already known were resumed: the cleaning of the environment, conservation and maintenance of the treasure, solution of the daily internal conflicts between those in the shelter. It was a moment of reflection about how to live in harmony in the shelter.

Visit of the team of the Pan-American Health Organization (PAHO) to get to learn about the House of Passage.

Selection of the clothes received. There will be direct distribution to those who need the most, as the donation was small. Mattresses donated by the Mormons in Boa Vista will arrive in Pacaraima. Many in the shelter are sleeping on the ground, on cardboard.