February 22 to 25, Thursday to Sunday

The Federal Public Ministry sent two researchers in charge of conducting a field research that began today and must last for two more days.

In the area of health, 15 services were registered and two referrals to hospital and to the health center. As the doctor himself informed, malnutrition of many children aggravates problems that, in thesis, would be simple.

The distribution of foods was complemented due to the unexpected arrival of non-registered people. Notwithstanding this, all were attended.

The third and last stage of vaccination against measles concluded with success: everyone was vaccinated.

During the habitual medical attendance of Fridays, 15 people were attended in emergency character and one was referred to hospital with acute gall bladder crisis. She will taken to Boa Vista tomorrow and will probably undergo surgery. 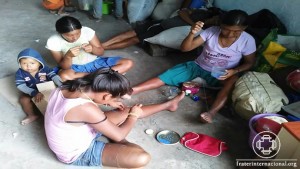 The activities of organization of clothes donated to be distributed continue.

There has been an increase in the migratory flux, both of Indigenous and the non-Indigenous people. Nowadays, in the breakfast at the house of father Jesus, for example, 750 people are served and the census in the House of Passing sums 464 people, including 200 children ages 0 to 12.

The general conditions of lodging are improving, although there are still many people sleeping on the floor over cardboard, with some coat or no coat.

The members of the Federal Public Ministry continued the interviews during the whole day.

Artisanship and painting activities continue. Today an artistic panel was erected, which was painted collectively in a very creative way.

The health attendance, bandages and nebulization are daily procedures in the House of Passing. Two children were referred to hospital with suspicion of measles. 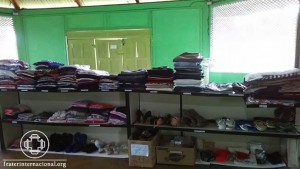 Logistics in the distribution of donations

There was a meeting considered important with bachelors to discuss aspects of behavior. Clarification about Brazilian laws and direct consequences of infractions. The meeting also touched on the preparation of a volleyball tournament. A well accepted initiative that generates social integration and places attention in other matters.

The panel on the porch of coexistence of the House of Passing continues to be painted.

The clothes received as donation continues to be organized for distribution. Due to the insufficient number of pieces, this work demands a complex and detailed logistics not to create problems during distribution.

Habitual health attendance: nebulization, bandages, and referrals to hospital. The hospital and the health system of Pacaraima are in an extreme situation due to the high number of people attended.

Again, organization of the donated clothes to be distributed to the population in the House of Passing.

In the afternoon, the missionaries attended Mass at the house of father Jesus. It was a communitarian celebration that gathers a great part of the Warao community, with moments that alternate Portuguese, Spanish and Warao languages. After the Mass, the team of missionaries made use of the time for rest and retreat.