Humanitarian Roraima Mission in Pacaraima – Expansion of the sanitary structures

February 26 to 28, Monday to Wednesday

There was distribution of food, a movement that takes hours and demands a complex logistics. The amount of food is the same and the number of people has increased. Nowadays they are 501 people in the shelter. 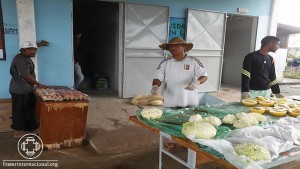 Attendence conducted in the health container, some cases taken to hospital and tests requested at the laboratory.

Visit of a delegation of the United Nations High Commissioner for Refugees (UNHCR) to get to know the House of Passing.

The building of cesspools is in progress. It is a work considered fundamental to maintain adequate sanitation conditions and to attend the number of people that stay in the shelter at the moment.

Immigrants in alarming conditions continue to arrive, especially coming from the region of Tucupita, in Venezuela. Whole families, with a great number of members, with dehydrated and malnourished children. 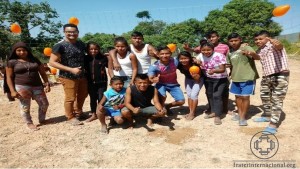 On their own initiative, with the help of a local trader, a group of youths from the Universal Church of the Kingdom of God has organized in the shelter several teams of volleyball and indoor soccer. These teams play every day at a sport court near the House of Passing, in a practice that attracts the interest of all, especially the youths from the shelter.

Today the health attendance was organized by Indigenous health agents that are being trained by a member of Fraternidade – International Humanitarian Federation for this task. The problems are recurrent and, for this reason, demand that other people be attentive to the diverse necessities: emergency transfer to the health container, to the health center, or in the most serious cases, to hospital.

A family whose members are HIV seropositive was transferred to Boa Vista, where the conditions for treatment are more adequate. They need specific medication and the newborn baby, who must not be breastfed by the mother has to drink a specific milk. in Boa Vista, as the members of this family are registered in the Single Health System of the Federal Government, they can receive both the medicines and the specific food.

The works of the second toilet of the House of Passing are in progress. The station of sewage treatment is in a stage of conclusion of construction. They are strategic structures because the assembly of new tents to expand the reception of the immigrants depends on them.

An activity that awakens the interest of many is the painting of panels, which is being developed in several areas of the shelter. These panels are elaborated and painted by the Indigenous people themselves. The paintings refer to topics such as peace, harmony, unity, organization, cleanness, in short, principles that contribute to all group life.

Transfer of four children to the emergency of hospital: they had high fever and rash on the body. As it was detected it was measles, the four children had to remain in isolation at hospital.

As many people in the shelter are sleeping on the floor, the unhealthy conditions aggravate even more the state of health of many of them, especially children.

Recreational activities and painting were conducted with the children. 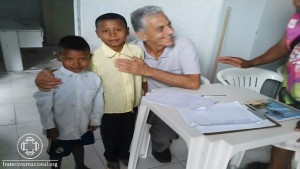 In an attempt to supply multiple material lack, many seek informal work. When they obtain some resource, they buy food, like wheat flour, sausage and soft drink envelopes. The consumption of this kind of food brings collateral effects. On the following day, people show signs of diarrhea, headache, vomit, etc.

Distribution of clothes that had been separated by families. Each family member chose an object: a piece of clothes, a pair of shoes, a cap or something else available.