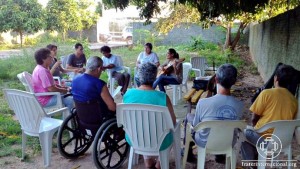 Choir rehearsal in the Nucleus-of-Light

On Sunday, 28, the group stayed in the House of Saint Joseph, conducting tasks of harmonization and others related to the mission, such as the updating of the census, the selection of clothes for donation and the organization of the secretary.

In the late afternoon, the missionaries went to the Nucleus-of-Light of Figueira in Roraima to participate in the meeting of the Choir of the Nucleus-of-Light. After the meeting, a part of the group of the missionaries went to the shelter, where they participated in a meeting with the Civil Defense and the immigrants, and touched on the issue of the refugees that must leave the place.

Monday, 29, began with the visit of a pastor of the Baptist Church, who had information about the situation of the immigrants and then offered the dinner of that night as a donation.

A teacher with the Federal Institute of Roraima (IFRR), went to the CRI (Center of Reference for the Immigrant), to organize the classes of Portuguese he teaches in the place.

The distribution was made of personal hygiene kits for the Venezuelan. A team of the TV of the legislative assembly of Roraima, which made a report about the immigrants. In the afternoon, a judge and the Prosecutor of Children and Youth of Roraima gathered with the missionaries of the Fraternidade – International Humanitarian Federation – to learn about the situation of the children in the shelter. 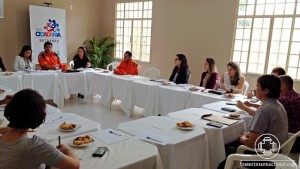 Task-force
On the 30th, Tuesday morning, the missionaries of the Fraternidade participated in a meeting at the Setrabes (Roraima Secretary of Work and Social Welfare), with representatives of the Civil Defense of Roraima, of the States Secretaries, of the Ministry of Health, of the ABIN (Brazilian Intelligence Agency), and of the UNHCR (United Nations High Commissioner for Refugees). The topics were the issue of the Venezuelan who are in Boa Vista and in Pacaraima, and the firs adjustments were made and appointed the meeting of a first group of work that will define the concrete subjects of help for these immigrants. 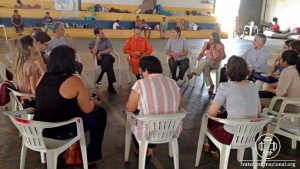 In the afternoon, the same group was in the shelter and talked with the Indigenous and non-Indigenous Venezuelan refugees to learn about their needs. Then, the team went the house of a Venezuelan who created the Association of the Venezuelans in Brazil, who has 250 families of Venezuelans who currently live in the city of Boa Vista.

A volunteer who makes health follow-up took a pregnant Indigenous woman for a consultation. “This participation of the volunteers from Boa Vista is very precious, because the team of missionaries cannot encompass everything, as an accompaniment of health can take a morning or even a whole day”, said Claudia, a missionary of the Fraternidade.

A pastor of the Evangelical Church and two priests of the Catholic Church visited the CRI. Visit to the shed in Pacaraima

Meeting in Pacaraima
Onasf the last day of May, the same task-force that gathered in the Setrabes went to the city of Pacaraima and met the city Mayor, members of the Brazilian Army and Indigenous representatives. After the meeting, the team was split into three: one to see administrative matters, another for those of health, and a third one for the matters of the shelter of the immigrants, and the Fraternidade participated in the last one.

The city already has a place and a project to install a shelter for the Venezuelan Indigenous immigrants, with the capacity for 40 tents, for 8 persons each, which will be assembled by the Brazilian army.

The group went to the place of the future shelter, an old shed of the traffic department, and also visited the Bus Station of the city, to see the conditions of the immigrants who are there.

On the same day, the missionaries went to the Federal Taxes Office in Pacaraima, to learn about the possibility and how would be the process of receiving as donations loads intercepted (provisions, hygiene products, furniture and vehicles) on the border. 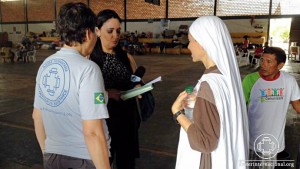 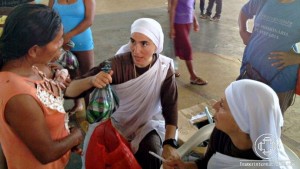 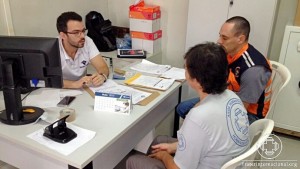