Humanitarian Roraima Mission – beginning of activities of the Administrative Headquarters

September 14 thru 20, Thursday thru Wednesday 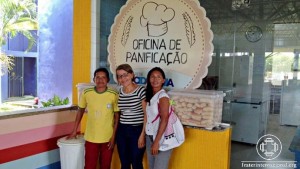 On Thursday, 14, in the very early morning, two Venezuelan immigrants began the course on bread-making. The activity takes place from Monday to Friday with the Network of Solidary Help of Boa Vista, which works with the Roraima Secretary of Work and Social Welfare (Setrabes) and with the Center of Integration of Persons with a Deficiency. Qualified personnel and equipment for the task are being offered.

At this first moment, the work is being accompanied by Missionaries of the Fraternidade – International Humanitarian Federation. “We perceive that with this new rhythm of arriving earlier at the shelter, we feel a more natural and harmonious integration with the tasks developed along the day”, said Elamed, a missionary of the Fraternidade.

During each day about 280 loaves of bread are made, which are distributed in the CRI – Center of Reference for the Immigrant. The flour used in the production of bread is donated by the Brazilian Government. “They are learning to deal with the ingredients and the procedures to make the bread. The whole process must be done until noon”, said Elamed.

A meeting with Indigenous Chiefs was held to comply with some of their suggestions, such as a census on the nets in the shelter and about what families would be living in the tents provided by the United Nations High Commissioner for Refugees (UNHCR).

Schools neighbor to the shelter complained about the smell of sewage derived from the use of the terrain by some Indigenous people as a toilet, and also about the smoke generated by the kitchen in the place, which enters the classrooms in the morning.

A meeting with the Indigenous Chiefs was held to reach a solution to these problems.

“It is a very complex situation for the Indigenous people, as it is an individual problem. A request was made to the UNHCR to use the machines that are in the shelter to cover these organic residues that are causing bad smell”, said Elamed. 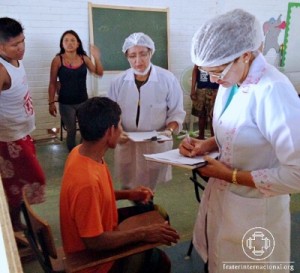 A member of the Network-of-Light who is a dentist was in the shelter with an assistant, and began a work that will last for a few days to collect information about the dental health of those sheltered. Several families and people were interviewed, who filled a form for the raising of information about the problems and necessities related to oral health.

Barbed-wire used as a clothesline was replaced by threads, as they were causing accidents to people.

In the afternoon, the missionaries went to the office of the Fraternidade in Boa Vista, to receive and organize materials of donation, as well as the logistics of the place of reception of donations.

At night, the missionaries went to the Nucleus-of-Light of Figueira in Roraima to watch a transmission of the Fraternidade about the Roraima Mission. Also some furniture of the kitchen and of the prayer room were organized, and some repairs were made in the place.

On Friday morning, 15, the non-Indigenous immigrants of the shelter conducted a meeting to talk about their situation in the place and the co-existence with the Warao people.

A delegate of the Federal Justice visited the CRI and granted to it the right to receive the payment of bails from Brazilian persons who were released from prison. These values will not be payed to the Brazilian Justice, but will benefit the CRI. 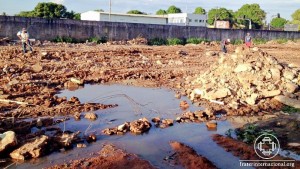 Dammed water in the external area of the shelter

Earthworks continue in the external area of the shelter, with the with the shipping by the City Hall of Boa Vista of debris that are scattered in places where so far there was only bush, enlarging the area.

The works also provoked a rising in the back of the terrain, which generated a “dam” of the toilet waters and flooded the lateral entrance and the access to the kitchen. With the use of hoes, little channels were opened which permitted the flowing of the waters.

“We must be very careful with the damming of the waters. With the heat we have in this region, and other agents, such as fecal materials, there may occur the proliferation of mosquitoes”, said Elamed.

Strategies for the correct distribution of meals 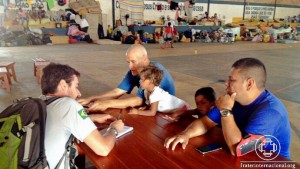 Meeting for the calculation of food in the meals

With the arrival of more food donated by the Brazilian government and by local traders, a meeting was necessary among the Fraternidade, the Setrabes, and collaborators in the kitchen of the CRI. Options of menu and the correct amounts of food were checked for the fixing of breakfast, lunch and other meals.

A team of reporters from Japan visited the shelter and collected information for a report on the conditions of the immigrants and their trip from Venezuela to Brazil.

The team of missionaries began to implement the practice of having representatives of both Indigenous and non-Indigenous people to  accompany immigrants to clinical centers and hospitals.

“They can work as translators and mediators, especially for those Warao people who are not accustomed to this contact. They also collaborate to liberate the missionaries for other tasks, as the accompaniment takes a long time”, explained Elamed.

Around noon, a Warao person riding a bike suffered an assault, which provoked a reaction en masse of the immigrants who are in the CRI going to the street looking for the assailant. With this, the intervention of the police to control the tense situation was necessary.

⟢
On Saturday, 16, the CRI received the visit of the Group of Support and Protection to the Indigenous people of Roraima, which went to the place to learn about the conditions of the immigrants, such as security, and use of alcohol and drugs.

Missionaries helped the moving of a family of immigrants with seven people who had been in the shelter for some months and went to live in a rented house. “This brings us joy and the hope that a new stage begins for these immigrants who will begin their lives again in Boa Vista”, said Elamed. 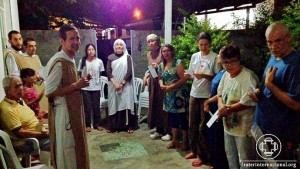 Choir rehearsal in the Nucleus-of-Light

During the transportation of a refrigerator donated to this family of immigrants, done in the pick-up truck of the Fire Brigade, the missionaries faced a fire in a little outdoor storage of used materials. They observed the work of the firepersons who had to take measures for the extinction of the fire.

At night, the group went to the Nucleus-of-Light of Figueira in Roraima and watched a transmission via internet of an event of the Fraternidade and then participated in the activities of the Choir. 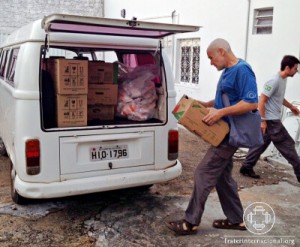 ⟢
On Sunday, 17, the missionaries conducted activities of harmonization in the House of Saint Joseph and in the storage of materials and of clothes for donation.

Then the donations were taken to the new administrative headquarters of the Fraternidade, which has more and more adequate space to store both food items and personal hygiene items, medicines and utensils for the making of artisanship.

⟢
On Monday morning, 18, the missionaries participated in the fixing of breakfast in the shelter and collaborated in the task of the immigrants of cleaning the toilets.

A donation was received from a neighbor of the CRI. With the money received, it was possible to buy kitchen utensils for the shelter (forks, spoons and knives, coffee filters) and for the bakery work.

In the afternoon, the activities of the missionaries were in the new administrative headquarters of the Fraternidade. Donations of rice were received, which had been in the office of the Fire Brigade and the container was prepared for the installation of shelves that will help improve the storage space.

At night, the group visited the house that will serve as masculine lodging for the missionaries who will participate in the Roraima Mission in the future. The architecture of the space and the needs of the house were evaluated. 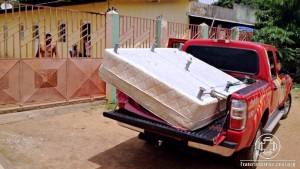 On Tuesday, 19, a mattress was donated, which was taken to the house of a Venezuelan family.

Accompaniment of immigrants to the clinical center to make band-aids.

Representatives of the Public Ministry were in the CRI and talked with the Indigenous Chiefs to learn about the conditions of the place and their situation in Brazil.

In the afternoon, the work was in the administrative headquarters of the Fraternidade, with the task of storing of rice and the finishing of the building of the shelves in the container. 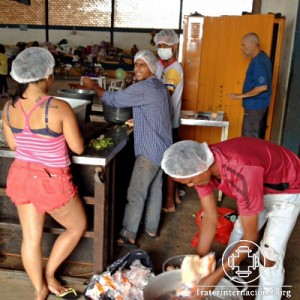 Hygiene in the manipulation of food

In the area destined to the handling of food items and in the kitchen of the shelter, hygiene practices began to be implemented, with the use of caps and masks.

On Wednesday, 20, a group of the United Nations High Commissioner for Refugees (UNHCR) went to the CRI and began a process of registry with the collection of information and photos of each person that lives in the place. The objective is to begin a stronger process of control of people in the shelter and in the giving of donations.

A group of Mormons also went to the CRI and gathered with the UNHCR.

A team of the Special Indigenous Health Secretary (Sesai) conducted tests for the detection of infectious diseases. 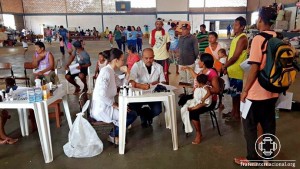 Health services of the UFRR

Students of the course of Nursing of the Roraima Federal University (UFRR) conducted services with a doctor. The result was the detection of several cases of smallpox among children and adolescents. The cases are in a certain way related to the quality of life of some groups more exposed to the sun, rain, floods and the handling of residues.

Raising of donations of food items in markets of the region.

Administrative Headquarters of the Mission 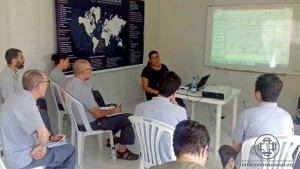 Missionaries of the Fraternidade participating in a training by UNHCR

The house that now serves as the administrative headquarters for the mission in the city of Boa Vista began its activities with the reception of new missionaries, who participated in a meeting of training with the UNHCR. The house has offices, administrative sector, meeting room and will also serve as a storage of donations, including items like foods and medicines.

With the arrival of 12 new missionaries, the group will begin to have 17 active members in the activities related to the Roraima Mission. Most of them participated in a two-day training given by UNHCR personnel in the administrative headquartes of the Fraternidade in Boa Vista. The theme was “Training for New Partners – Partnership Project Agreement and Matters of Program”. The UNHCR has a partnership with the Fraternidade in the Project “Support to the Management of Shelters for Venezuelan People in Roraima”. 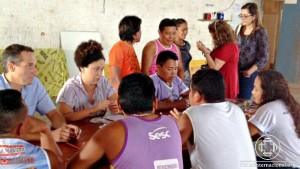 Meeting of UNHCR with Indigenous Chiefs 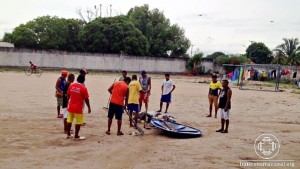 Activity of harmonization in the area near the showers 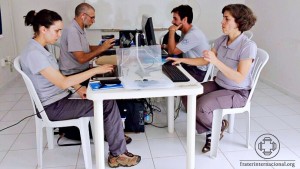 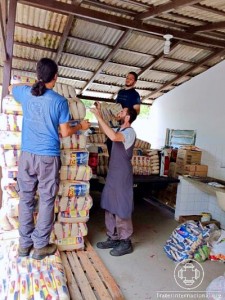 Donations in the administrative headquarters 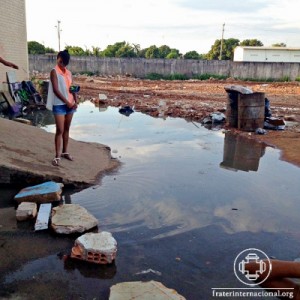 Water dammed in the shelte