Volunteers of the Network-of-Light of Europe keep supporting, in the context of Greece Mission, several organizations in the social services they render to refugees and poor Greeks in Athens and in the outskirts of the city. 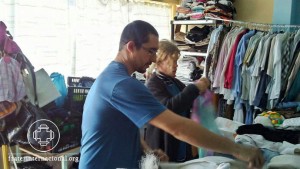 The collaborators collaborate with the Sisters of Charity of Mother Teresa of Calcutta, with Caritas Hellas, with an Orthodox Church in the city of Anavyssos and with an association of Greek volunteers dedicated to social works in Lagonisi.

The collaboration includes tasks such as the organization of donations of clothes, footwear and toys; assistance to the needy who come seeking these items; the elaboration and distribution of breakfasts and lunches (which includes the processing of great amounts of vegetables); the preparation of food kits for needy families (pasta, sugar, tomatoes, beans, lentils, chickpea); the harmonization of refectories, the kitchens and of other environments, as well as visits to centers of detainees of irregular refugees.

The volunteers also dedicate one day a week to cares to the place of the European missionary base of Fraternidade – International Humanitarian Federation (FFHI), in Palaia Fokaia, 40 km from Athens and 2 km from Anavyssos.

A lesson of gratefulness 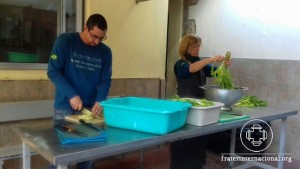 During their experience in Greece, the volunteers of Fraternidade fraternized with Greek homeless people and with refugees that mainly come from Arabian and African countries, and from Eastern Europe, who flee from their countries, face situations of humanitarian crises caused by wars, persecutions and by the lack of economic opportunities. 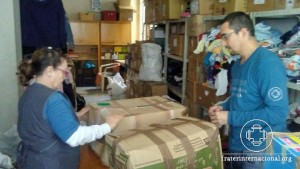 Two cases have impressed Ricardo Treno, a volunteer of the Network-of-Light of Europe. One has to do with the difficulties that the refugees face to find employment in Europe. The other concerns the feeling of gratitude that many of them develop and express at every moment. Ricardo commented the situation of an Egyptian engineer, who, in spite of his university background, does not manage to get a job nor even in basic tasks.
The volunteer also reported the experience he lived in the refectory of Caritas Hellas, once, when he was responsible for receiving the people. “An Arabian family of a couple with several children arrived: as they entered, the youngest, still sitting in a baby car, addressed me a Muslim reverence, which means: ‘Blessed be the Lord’. It was a lesson of gratitude that touched me deeply”, said the missionary.

The European volunteers help prepare and serve foods at Caritas Hellas to about 500 to 600 people a day, while in the main headquarters of the Sisters of Charity, the number of those assisted oscillates around 50 people. 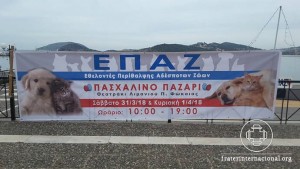 Fair of help to the Animal Kingdom

On March 19, the volunteers of Fraternidade participated in the celebrations held at the Headquarters of the Sisters of Charity on the occasion of the day of Saint Joseph. They attended a mass celebrated by the Bishop of Athens. Before that, they helped prepare pies and juice, which were later shared among those present.

On the last day of March, the group on mission supported a Greek female collaborator in the conduction of a fair of charity for the Animal Kingdom. “This kind of initiative aims at drawing the attention of people about the importance of taking care of the animals with more love”, highlighted Ricardo. 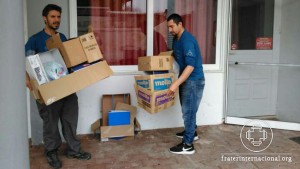 Harmonization in the church São Teodoro

Following the calendar of the Orthodox Catholic Church, from the 31st of March to April 9 were conducted in Greece the solemnities of the Holy Week and the festivities of Easter. On Wednesday, April 4, the volunteers of Greece Mission participated in a ceremony at the Cathedral of Athens, in attendance to an invitation of the Sisters of Charity. On Friday, April 6, they were at the Orthodox Church of Saint Theodore, in Anavyssos, where they supported the organization of a live Way of the Cross, featured by children.

During the month of April, the missionaries also helped the Sisters of Charity in the purchase of products for those who are in centers of detention for irregular refugees, as well as common prisoners.

Assistance to the Association of Volunteers of Lagonisi is demanding a special effort, as their storage of clothes is being transferred to a bigger place.

At Caritas Hellas and at the Orthodox Church of Saint Theodore, in Anavyssos, the task with the pieces of clothes concentrates in the renewal of stock during the arrival of springtime.