The number of Venezuelan migrants in Colombia has reached 1.3 million people in May, according to data of UN – United Nations, which represents the second greatest migration in the world, after the crisis caused by the war in Syria. Daily, an average 63 thousand Venezuelans cross the border between Venezuela and Colombia, of which 2.5 thousand remain in Colombian territory, being subjected to severe lack of food, medicine, shelter and security.

Approximately 80% of the Venezuelan refugees in Colombia suffer from food insecurity, according to a study of the World Food Program (WFP), published in Geneva, Switzerland, in 2018.

It is in this critical and alarming scenario that Fraternidade – International Humanitarian Missions resumes its actions in the South-American country, which began in October 2018 and were suspended in January of this year, due to local bureaucratic problems. The team of  12 missionaries, arrives today, June 4, in Bogota, the Colombian capital, and will work in three cities, Bogota, Guatavita and Cucuta, in the border with Venezuela. 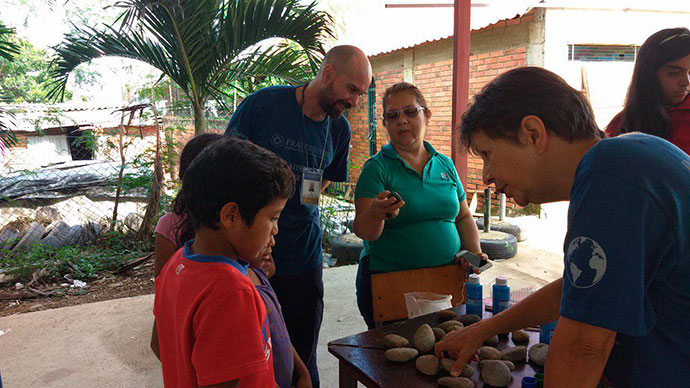 In Cucuta, Fraternidade work will be carried out for the Venezuelans that escape on foot to Ecuador and Peru, crossing Colombia; but also for people in situation of social vulnerability, refugees or not, and for Indigenous communities.

In the refugee assistance centers  in the Colombian border, families can only stay from three to five days and then have to leave to make room for other newly-arrived, going to live in the streets.

In the first stage of Colombia Humanitarian Mission, the team accompanied the migrants in their walk from the border to Bogota, rendering service to them, offering food and health care. They could, thus, mitigate the drama and difficulty that the Venezuelans were facing during the journey.

Later, they directly supported the Centro Piloto Scalabriniano of Cucuta and the Center of Migrations with recreational activities for the Venezuelan and Colombian children and adolescents, and with occupational activities (art craft) for the adult population.

In this second stage, the goal of Fraternidade is to maintain the Colombia Mission on a permanent basis. For that purpose, every help is welcome. Initially, Fraternidade will act with its own resources to guarantee housing, food and transportation to the missionary team.