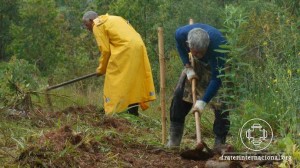 An embryo of forest was created in one area of the Lands of the Fraternity, one of the hosting areas of the Community-of-Light of Figueira, in the region of Carmo da Cachoeira city, state of Minas Gerais, Brazil. The creation of the forest took place during the Third Meeting with the Trees, held in the Lands of the Fraternity, from November 10th  to 13th, this year,  and had the participation of 25 collaborators.  Two hundred and twenty (220) seedlings of native trees of the savannah of Minas Gerais (tropical savannah) and of Atlantic Forest were planted. 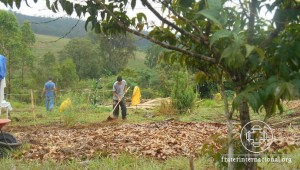 Before planting the trees, the soil preparation was carried out for four months, with the creation of islands (circular spaces of the soil of approximately three meters in diameter) that were worked with natural nutrients (dried leaves, branches, manure, stone powder) and with the action of the Kingdoms of Nature.  This preparation work began during the Second Meeting of the Trees, held between June 14th and 17th, this year.

“We prepared the land in a dry season and now we are sowing it.  The objective is to recreate the native forests and expand the life of all Kingdoms of this area”, explained Hernán, coordinator of the Group of the Trees of the Community-of-Light of Figueira,  the sector responsible for organizing  such meetings. 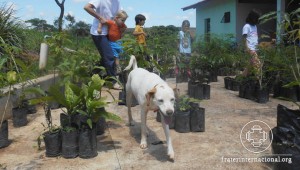 Seedlings of Aroeira, Quaresmeira, Lobeira, Lapacho (Ipê), Jatobá, Guapuruvu, Jacarandá, Acácias, among other species were planted. Six to seven plants were put in each one of the 60 available islands.

The group also worked the ground, preparing the contour lines  to allow the rainwater to penetrate into the soil and collect some moisture.  Structures were also put by using pieces of bamboo, in H shape, to make easier the landing of the local birds.

“The idea is to create a preserved area with a combination of species that grow faster  with species that take longer to grow.  Some of them will already be giving shadow within two or three years”, said Hernán.

The meeting counted with the participation of André Rivola, technician of the NGO Floresta Brasil (Forest Brazil). He himself conducted the practical tasks and lectured on preserved areas. 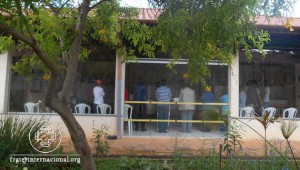 The program of the Meeting of the Trees included the activities of the Marian Center and Community-of-Light Figueira:  Via Crucis, study with Friar Luciano, ecumenical communion, lecture by Trigueirinho and attunement with mantras.  There were also grup attunement in the Lands of the Fraternity with the Indigenous, Devic and Angelic Consciousness and together with the Kingdoms of the Nature.

“With such meetings, we try to collaborate with the expansion of people consciousness on the importance of living in communion with the Kingdoms of the Nature.  While the large majority of the humanity only consumes and devastates things, we try to balance, somehow, all that deterioration”, concluded Hernán. 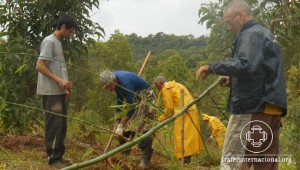 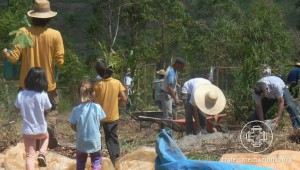