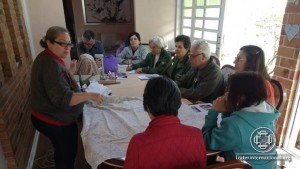 An environmentalist initiative of the Network-of-Light group of Curitiba, state of Parana, Brazil, is expanding in the South of Brazil, and at the beginning of December also included the Nucleus-of-Light of Figueira in Sao Carlos, State of Sao Paulo: a workshop-course that trains the making of ecological diapers and feminine towels.

The activity is being coordinated by the teacher Denise de Oliveira Nobre Aguiar. It began on July 7, 2018, when 18 collaborators from several Network-of-Light groups of the South of Brazil, Rio de Janeiro and of an indigenous community of the state of Santa Catarina participated in the first workshop-course, in Curitiba. In September and October, the events repeated in Florianopolis (Santa Catarina), Porto Alegre (Rio Grande do Sul), again in Curitiba, with the group of Joinville, and in Londrina (Paraná). On December 1st, the course was held in the Nucleus-of-Light of Figueira in Sao Carlos. 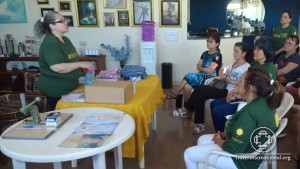 The idea is to form agents that will multiply the ecological technique, with the purpose of collaborating with the sustainability of the planet and at the same time to offer more inexpensive options, both for the use at home and to donate them to needy families and social groups, such as indigenous villages and the Venezuelan migrants that are in the governmental shelters in the state of Roraima, whereFraternidade – International Humanitarian Federation (FIHF) works, through its Humanitarian Roraima Mission.

The course explains in a detailed way the environmental impact of plastic residues and the ecological manner of replacing disposable products. It describes costs and materials necessary for the assembly of the molds and the making of diapers and feminine towels. In the end, each participant receives an illustrated folder with the content of the course.

The event awakens interest not only in members of the Network-of-Light groups but also in other people, who enroll and actively participate. 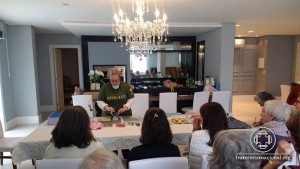 “Such a simple act as this, filled with love, relieve the Kingdoms of Nature a lot, which are, as our beloved master Trigueirinho clarified to us, the Cyrenians of our time, who sustain us for us to carry our cross. Our infinite gratitude to him for showing it is possible to build a better world”, highlighted Sandra Calvi, of the Network-of-Light of Porto Alegre.

“I think that the course was not only technical but especially a humanitarian proposal, of respect to cultural diversity and to gender equality, of respect to the environment. In these times of violence and selfishness, it was very important to dedicate some time to learn something useful for the others”, reflected Matheus, from Londrina. 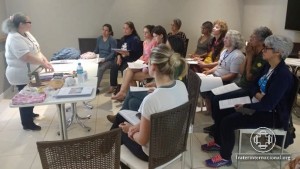 In the same line of thought, Cleonice, of the Network-of-Light of Joinville, stated that the “making of ecological diapers makes it possible to live an experience of love for others and for the planet”.

“The course awakens not only a new impulse of service through sowing, but also the strengthening of union and of group work”, highlighted Lila Tiemi Assaoka Hossaka, the coordinator of the Network-of-Light of Curitiba.

The Nucleus of Sao Carlos

“With learning how to elaborate ecological diapers, we can position ourselves in an attitude of decidedly working so that someday the behavior of humanity, consolidated in comfort, can glimpse a more conscious and natural future”, asserted Mother Maria Cleonice, a nun of Grace Mercy Order and the coordinator of the Nucleus-of-Light of Sao Carlos.