A great group service of general cleansing of the CRI was conducted in the morning, with the removal of trash from the external area of the place. Presence of personnel of the CAER – Company of Water and Sewage of Roraima, who conducted repair services in sewage, waters and others.

The day was dedicated to assistance to several health cases, some that were already being observed and other new cases that appeared.

Several displacements of patients to polyclinics and hospitals of the region, with the help of the Fire Brigade and of the Civil Defense of Roraima.

Visit to a hospitalized child with an infectious problem in the foot and with suspicion of tuberculosis.

Cuban refugee with fever and serious kidney problems, was assisted, and a series of examinations was requested.

In the afternoon, a Venezuelan refugee was transported to a polyclinic with high fever, diarrhea and pain in the body. He was medicated and began examinations to study the disease.

Indigenous child with legs in plaster began to have bedsore, and will be taken to hospital tomorrow. Procedures to relieve suffering were applied.

Donation-raising at supermarkets and in commerce in general, especially of perishable food (vegetables, greens and fruits), which will receive selection tomorrow.

Playful activities with the children and meeting with women for the organization of an indigenous Christian dance in devotion to the Virgin of Coromoto (Venezuela).

“This for us represents this seed of Indigenous consciousness being rescued in them, which seemed apparently lost, with these women begging on the streets, but in truth they do have this Indigenous seed and are very enthusiastic”, said Clara, a missionary of the Fraternidade – International Humanitarian Federation. 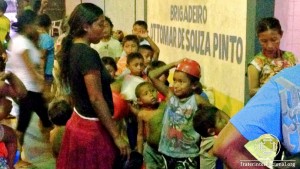 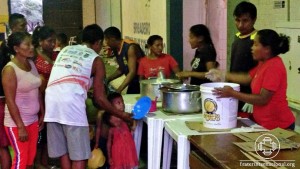