The Community-of-Light of Figueira gave continuity to its activities with the Plant Kingdom, organizing a volunteer group service of manual harvest of corn. The work was conducted on July 19 in the Lands of the Sun and had the aim of obtaining selected grains for the next sowing.

About 70 collaborators and residents of the community participated, as well as monastics of Grace Mercy Order. Altogether, ten countries were represented in the task. 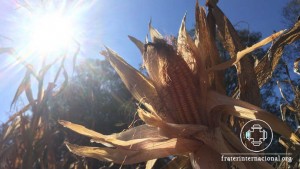 The harvest concentrated in a sector of Baependi corn, a mixed variety of yellow, orange and purple corn. It is a pure material, without genetic modifications, which has been cultivated in Figueira for five years. It is good for direct consumption and for the elaboration of derivatives.

The participants began the day at seven a.m., with a spiritual attunement. Then, they received technical instructions about the task to be developed and shared breakfast. Then, they went to the cultivation area and put their hands to work. Around 11 a.m., they began the second stage, which consisted in the selection of grains to be used as seeds of the 2018/2019 season. 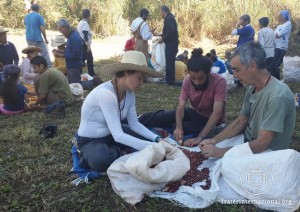 The volunteers, several of them present in Figueira for the first time, separated the more well formed spikes, more apt to preserve the genetic quality of the next cultivations. This material will be planted when the rainy season begins, usually in November) and will be harvested three months later.

“Besides developing fraternity and group unit, this activity aims at strengthening the spiritual bases of our work as a Community-of-Light, enabling a more conscious and harmonious contact of the human being with the Kingdoms of Nature”, explained Friar Renato, of Grace Mercy Order, in charge of the Seeds Sector of the Community-of-Light of Figueira. 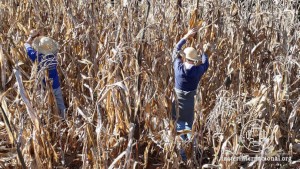 “I liked it very much. It is something I had never done before. I had never entered a corn cultivation area. It is wonderful to know pure seeds, something that is very hard to find nowadays, and to have the opportunity of collecting them with my hands, of feeling them”, commented Izabel Bonfins, from Campinas, Sao Paulo, who was visiting Figueira for the first time.

For Claudia Venancio Quaresma, from the shore of São Paulo, who also was visiting Figueira for the first time, “the energy of the group service is very good”. “To see the harvested fruits and be able to share the task among everyone is a very strong experience”, said Gregory Puhan, an anthropologist from Novo Hamburgo, Rio Grande do Sul, who has been travelling throughout Brazil for the last 10 months, “knowing Indigenous communities and proposals of alternative life”. 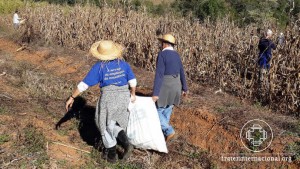 “One of the things that interested me the most was to know the work with the earth that is done here; I had already heard a lot about it. To know the native varieties which you work so well. I loved it. I thought it is a good idea to share the task with everyone, it was a very intense experience”, said Gregory Puhan, an anthropologist, from Novo Hamburgo, Rio Grande do Sul, who for ten years has been travelling in Brazil, “getting to know Indigenous communities and proposals of alternative life”. 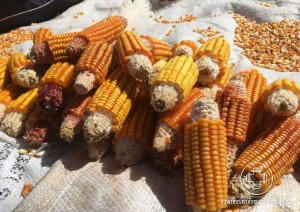 “It was very fun, nothing difficult for me. It was very pleasant to feel unity with nature and with the brothers and sisters”, expressed Karen de Oliveira, from the city of Amparo, Sao Paulo, who was participating for the first time in a group service of seeds.

“The task of today seemed excellent to me, essential. I believe that, as humanity, we should participate more in this kind of activity, because thus we become aware of where foods come from, how much work it takes to cultivate them, to harvest them, how is the process of selection of seeds, so that the harvest may continue”, manifested Alejandro Gomez, from Cali, Colombia. Alejandro is spending some time in Figueira. “I began to seek something special that cannot be found in the world and, then, I decided to come and know, experiment, follow my interior and let myself be guided”, explains the youth.