December 21 was a day for giving 136 children of the community of Morrinhos IV the bags collected in the campaign Donate toys, win smiles, organized by  the Guarujá and Santos Light-Network Groups, in Sao Paulo.

The invitation was to whomever wished to collaborate in giving a kit containing some clothing, a pair of shoes, a toy, and a book.

The announcement made by both the social networks and friends and members of the Guarujá Light-Network team was positive, in that 90% of the people who donated were still not familiar with the services provided but contributed to the cause through the credibility already established.

The involvement of those who opened their hearts in that loving gesture resulted in more gifts than children registered to receive them, surprising everyone in a positive way! 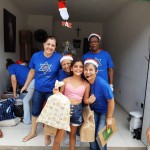 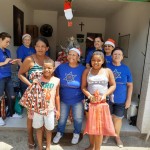 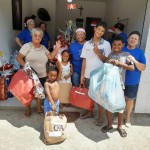 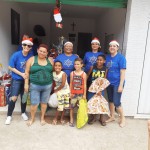 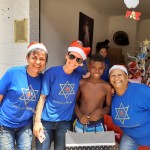 And as the intention was to generate more smiles, Rosi Freitas, who coordinates the SP Light-Network group and supports the Guarujá Light-Network group, together with the 20 dedicated godparents, parents, friends, and neighbors, went looking for other children, younger than 14 and from  very low income homes, offering them the chance of benefiting from the campaign. “It is a true joy!”, she recalls.

Priscila Orsi, one of the godmothers that has collaborated for the last two years in the work, says that “This year was very challenging, difficult in many ways; even more so for us, a very small group, but full of goodwill! And uniting our efforts to help such a needy community as that of Morrinhos in Guarujá (…), we tried to provide a little dignity for the families that live there.”

The name of the campaign, Donate toys, win smiles, had the intention of educating through a genuine and loving giving with an exchange of affection, making the whole process more humanitarian through a higher energy, consistent with the true meaning of Christmas. “In the beginning, I believed that it was the Community that most gained with the donations, but I was mistaken. Those who gained the most were us. We gained smiles, love, affection, words and looks that spoke for themselves and this warms our hearts…

Gratitude is the word for being involved in such a benevolent and worthwhile project as that of that group of the Light-Network. I saw that each one of us can gift a little bit of our time, and that little bit of nothing can be everything in the life of many people. Love and gratitude are what I feel about the project” declares Priscila, concluding that “Much is still to be done, but the seed of love and hope was planted and we believe in a better tomorrow for those families; we believe and will do all we can to help them in all ways.”

The nuclei responsible for the initiative are affiliated with the Fraternidade-International Humanitarian Federation (FIHF).

To be a part of activities such as this one, contact us by phone +55 13 99788-7941 or by email to redeluzsaopaulo@fraterinternacional. org