1000 Hail-Marys in unison and with a single heart 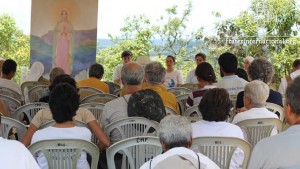 The Hill of Apparitions, located in the Community-of-Light of Figueira, in the town of Carmo da Cachoeira, Minas Gerais, Brazil, received great faith and love from members of different areas of this Community. It was Sunday, February 27, and they were practicing the spiritual exercise of one thousand Hail-Marys for the first time this year. United in unison and a single heart, they made the place vibrate, responding to the invitation of the Marian Center of Figueira, which organized the event. 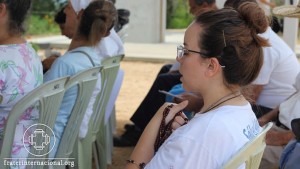 An intense day favored the prayer and contemplation that so much fosters spiritual growth. This devotional exercise is based on the prayer of the four mysteries of the rosary said to the Virgin Mary. Two-hundred and fifty Hail-Marys in each mystery. Mother Isabel, of Grace Mercy Order, in her opening words, highlighted that “in all consciousnesses, prayer activates codes that have been planted by the Divine Hierarchy, which allows the operation of the Plan of the Universal Mother for the welfare of humanity”. 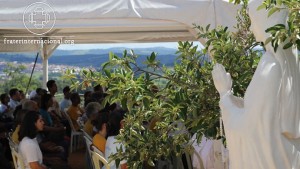 María de los Dolores lives in Lambari, Minas Gerais, and in her fourth visit to the Marian Center shared the following: “I am evangelic, and I want to say that I like to come here very much, I feel Christ present in all, and this relieves my spirit. I confess that at first, I had a kind of inner conflict, but now I feel at peace.” About the one-thousand Hail-Marys, she commented she feels deeply touched and very well in each participation, expecting to be better when she leaves than when she arrived.

“The first one-thousand Hail-Marys were wonderful, sustained by the whole community with a lot of energy, which prepares us to receive pilgrims between March 2 and 6”, comments sister Franca, of Grace Mercy Order, which organizes the Marian Center of Figueira.

To participate in this and other activities of the Marian Center, get in touch with us at